The Motor Theory of Goal Tracking

\emph{The Motor Theory of Goal Tracking} Infants’ pure goal-tracking depends on the double life of motor processes.
According to the \emph{Motor Theory of Goal Tracking}, infants (and adults) sometimes track the goals of others’ by means of motor processes \citep[see][for details]{sinigaglia:2015_puzzle}.
More carefully the \emph{Motor Theory of Goal Tracking} states that: \begin{enumerate} \item in action observation, possible outcomes of observed actions are represented motorically; \item these representations trigger motor processes much as if the observer were performing actions directed to the outcomes; \item such processes generates predictions; \item a triggering representation is weakened if the predictions it generates fail. \end{enumerate} The result is that, often enough, the only only outcomes to which the observed action is a means are represented strongly. 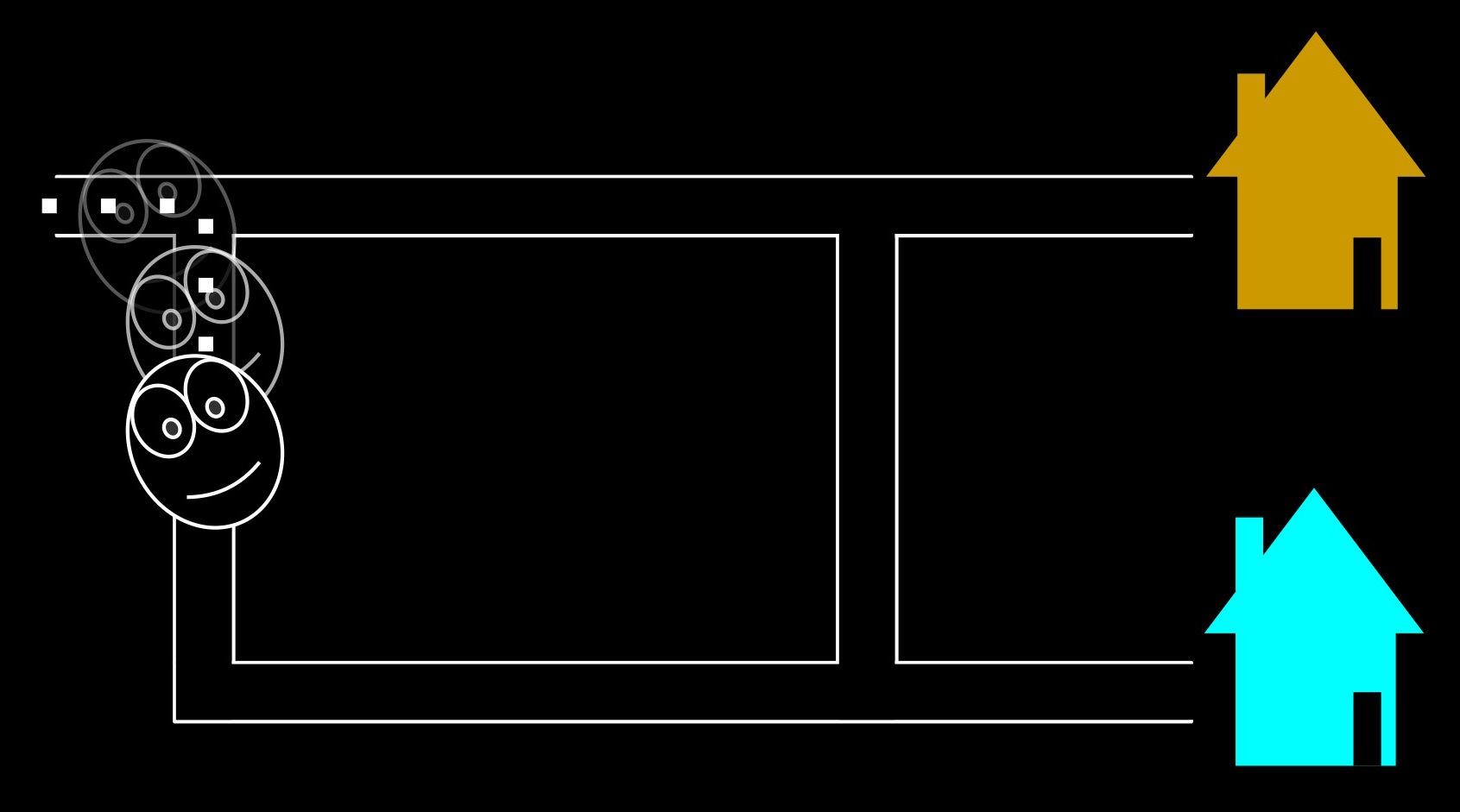 The principles comprising the Teleological Stance are things we know or believe, and we are able to track goals by making inferences from these principles and our beliefs about the means someone is pursuing.

Infants and adults engaged in goal-tracking reason about to which outcome a means is the best available in fundamentally the same way that you or I do when trying to work it out explicitly.
Although I don’t think they have written about it in quite the terms I use, I take Gergely and Csibra to be endorsing the Simple View.

Suppose you are reaching for, grasping, transporting and then placing a pen. Performing even relatively simple action sequences like this involves satisfying many constraints that cannot normally be satisfied by explicit practical reasoning, especially if performance is to be rapid and fluent. Rather, such performances require motor representations. These representations are paradigmatically involved in preparing, executing and monitoring actions.% \footnote{% See \citet{wolpert:1995internal, miall:1996_forward, jeannerod:1998nbo, zhang:2007_planning}. Note that motor representations sometimes occur in an agent who has prepared an action and is required (as it turns out) not to perform it: although she has prevented herself from acting, motor representations specifying the action persist, perhaps because they are necessary for monitoring whether prevention has succeeded \citep{bonini:2014_ventral}. } But they also live a double life. Motor representations concerning a particular type of action are involved not only in performing an action of that type but also sometimes in observing one. That is, if you were to observe Ayesha reach for, grasp, transport and then place a pen, motor representations would occur in you much like those that would also occur in you if it were you---not Ayesha---who was doing this.
Converging evidence for this assertion comes from a variety of methods and measures; but I won’t mention any of that here.
Recall this, it’s time to make good on the answer ...

mTgt is an alternative to the Simple View. The idea is that pure goal-tracking involves motor processes rather than thinking and reasoning about goals.
But how could motor processes enable goal tracking?
At this point it is helpful to think about speech. To utter a phoneme is to produce complex coordinated movements of the lips, larynx, tongue and velum. Further, how these should be moved and what sound should be produced depends on many factors including phonemic context, rate of speech and prosody.
So uttering a phoneme is unlike pressing a key on a piano keyboard: it not a matter of producing a particular sound but of performing a complex, goal-directed action.
We know from Riikka Möttönen’s research that there is striking new evidence for what is sometimes called the Motor Theory of Speech Perception.
So speech perception is special case of goal-tracking. The perceiver’s task is to recover the goal to which the utterance of a phoneme is directed.
mTgt is simply a generalisation of the Motor Theory of Speech Perception
In performing an action, there are motor processes which compute means given goals. The same processes can be used when observing an action for tracking goals. 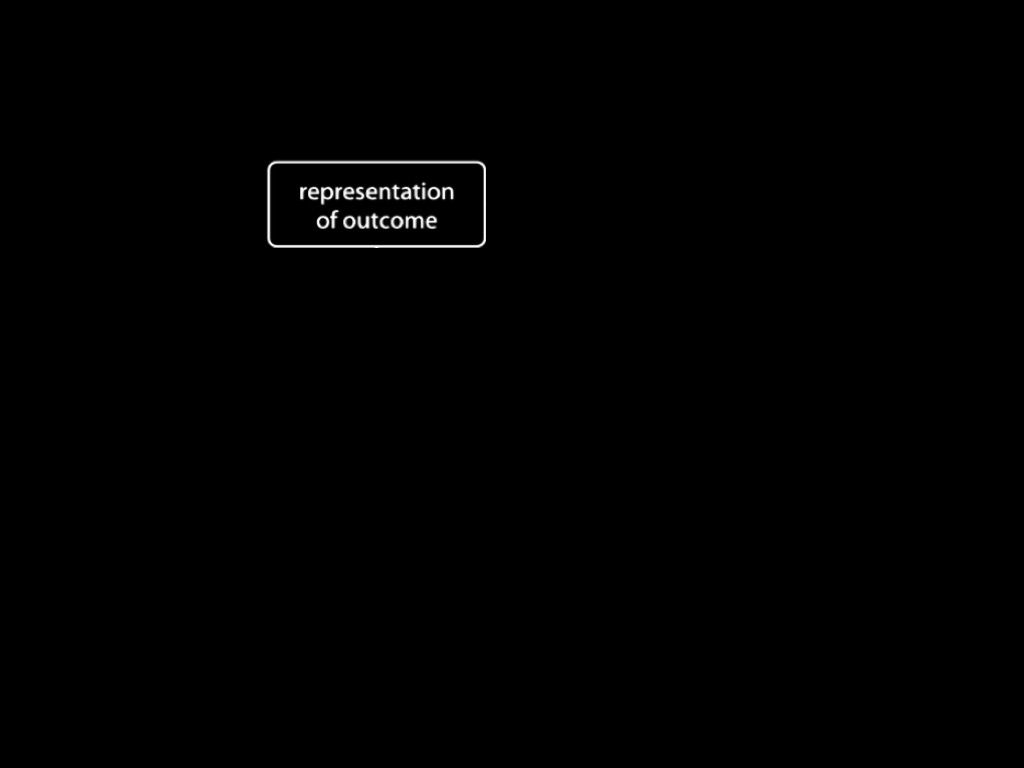 Outcomes such as reaching for and grasping of a cup can be represented motorically. 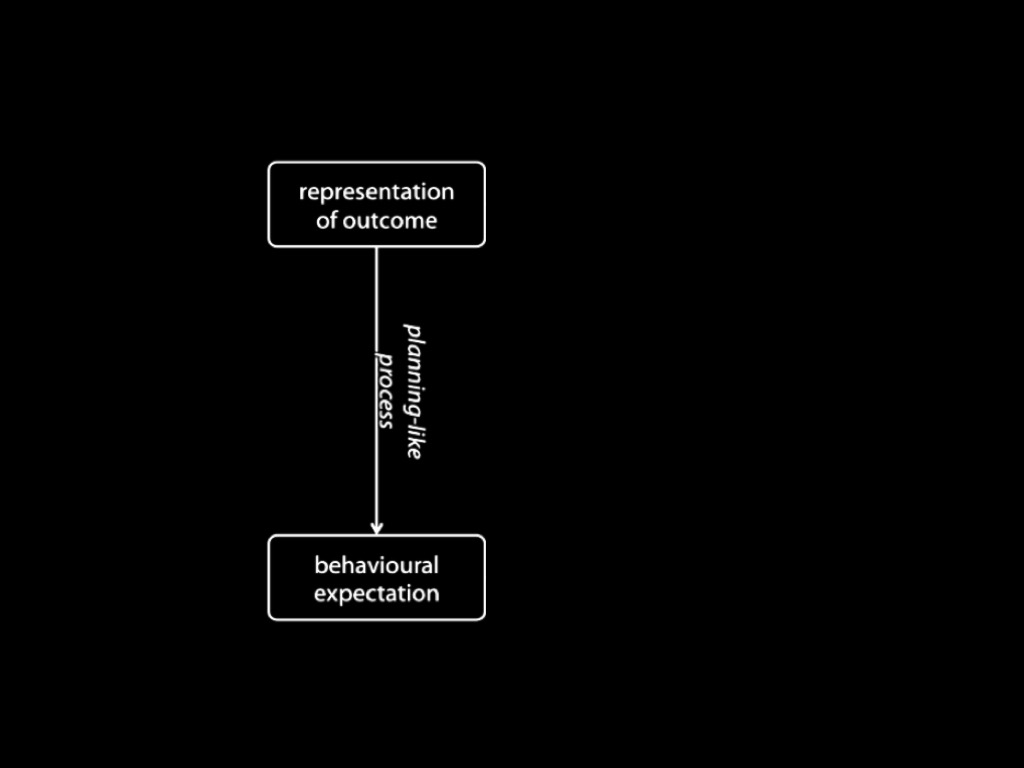 As a body of research on mirror neurons and motor simulation more generally demonstrates, motor representations of outcomes can generate expectations concerning another agent’s behaviour

These expectations are plausibly compared with the behavior that is actually observed. 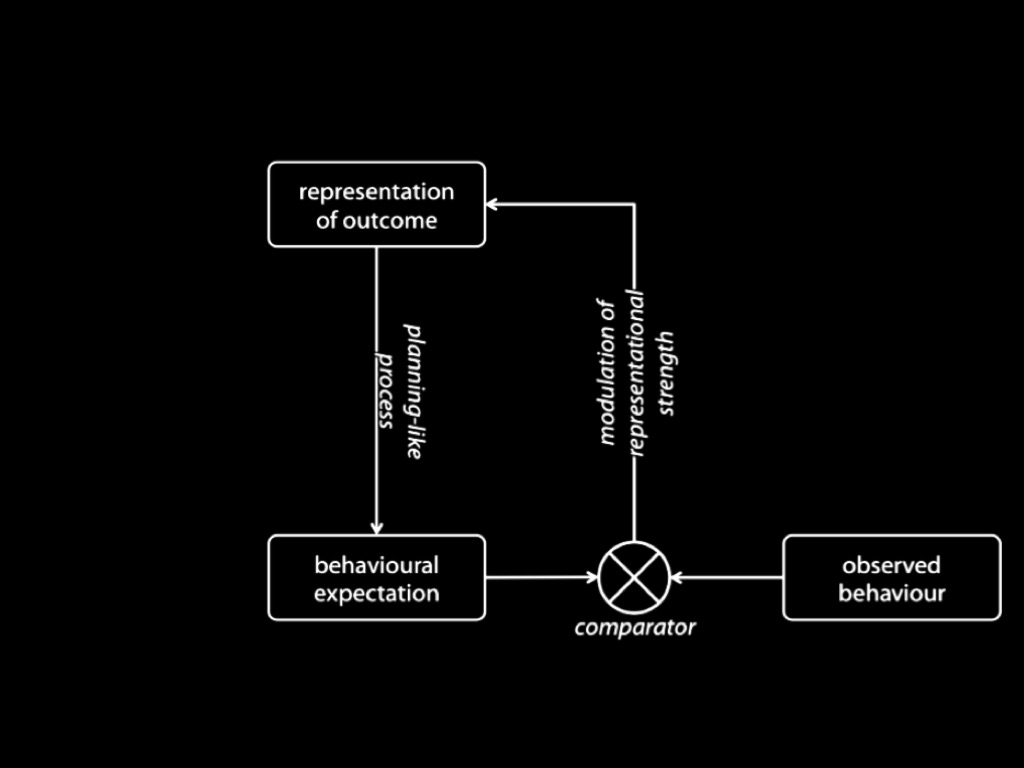 And we conjecture that the result of this comparison modulates the strength of the motor representation of the outcome.
Within limits, this modulation will ensures that an outcome represented motorically is likely to be a goal of the observed action.
In this way, motor representations enable goal tracking.

Goal-tracking is acting in reverse. -- in action observation, possible outcomes of observed actions are represented -- these representations trigger planning as if performing actions directed to the outcomes -- such planning generates predictions -- a triggering representation is weakened if its predictions fail The result is that the only only outcomes to which the observed action is a means are represented strongly.
There is evidence that a motor representation of an outcome can cause a determination of which movements are likely to be performed to achieve that outcome \citep[see, for instance,][]{kilner:2004_motor, urgesi:2010_simulating}. Further, the processes involved in determining how observed actions are likely to unfold given their outcomes are closely related, or identical, to processes involved in performing actions. This is known in part thanks to studies of how observing actions can facilitate performing actions congruent with those observed, and can interfere with performing incongruent actions \citep{ brass:2000_compatibility, craighero:2002_hand, kilner:2003_interference, costantini:2012_does}. Planning-like processes in action observation have also been demonstrated by measuring observers' predictive gaze. If you were to observe just the early phases of a grasping movement, your eyes might jump to its likely target, ignoring nearby objects \citep{ambrosini:2011_grasping}. These proactive eye movements resemble those you would typically make if you were acting yourself \citep{Flanagan:2003lm}. Importantly, the occurrence of such proactive eye movements in action observation depends on your representing the outcome of an action motorically; even temporary interference in the observer's motor abilities will interfere with the eye movements \citep{Costantini:2012fk}. These proactive eye movements also depend on planning-like processes; requiring the observer to perform actions incongruent with those she is observing can eliminate proactive eye movements \citep{Costantini:2012uq}. This, then, is further evidence for planning-like motor processes in action observation.
So observers represent outcomes motorically and these representations trigger planning-like processes which generate expectations about how the observed actions will unfold and their sensory consequences. Now the mere occurrence of these processes is not sufficient to explain why, in action observation, an outcome represented motorically is likely to be an outcome to which the observed action is directed.
To take a tiny step further, we conjecture that, in action observation, \textbf{motor representations of outcomes are weakened to the extent that the expectations they generate are unmet} \citep[compare][]{Fogassi:2005nf}. A motor representation of an outcome to which an observed action is not directed is likely to generate incorrect expectations about how this action will unfold, and failures of these expectations to be met will weaken the representation. This is what ensures that there is a correspondence between outcomes represented motorically in observing actions and the goals of those actions.

The Motor Theory of Goal Tracking
is part of a dual-process theory ...

‘proactive gaze’ and ‘explicit judgement’ are variables whose values represent whether there is a proactive gaze or explicit judgement, and what is it to or about. Likewise, ‘motor process’ is a variable whose values represent ...
The lines depict how the variables are causally related. I’ve used thick and thin lines informally, to indicate weaker and stronger influences. 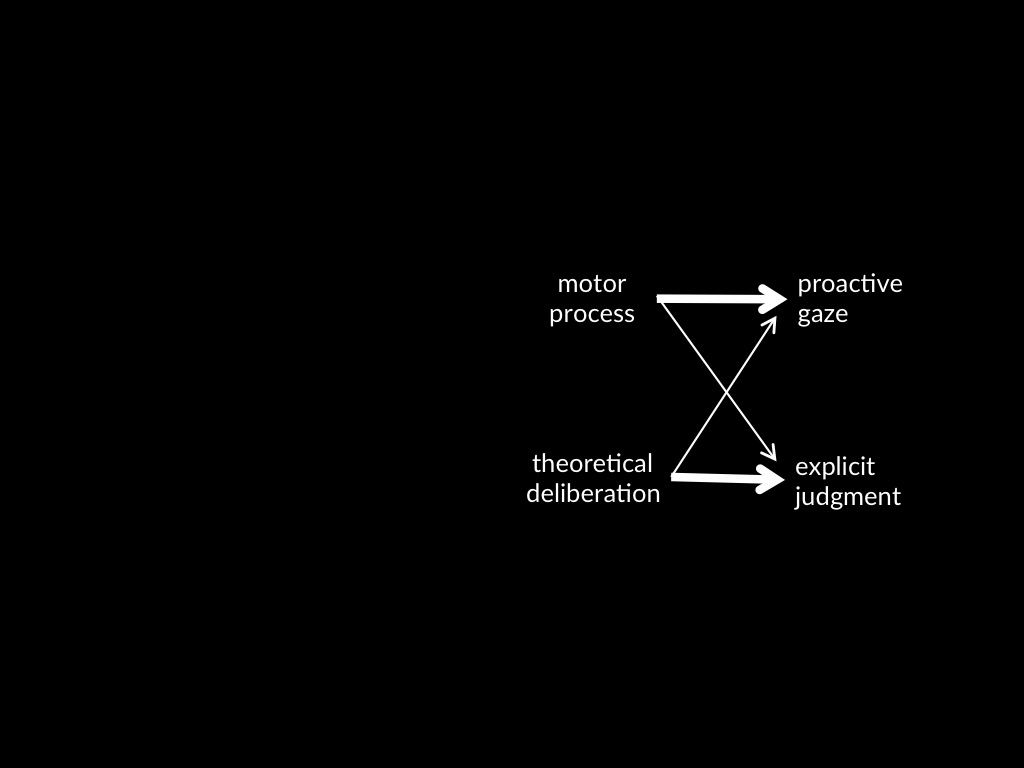 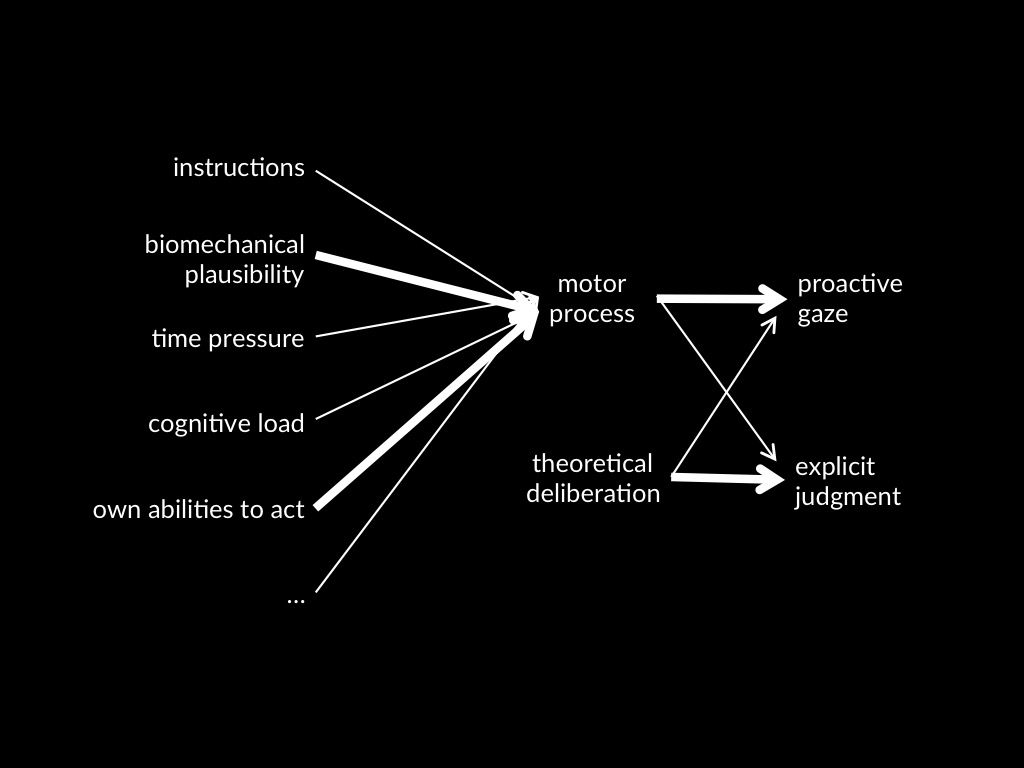