The Pulfrich double pendulum illusion \citep{wilson:1986_impossibly}.
figure caption: ‘The double Pulfrich pendulum: (a) construction of the pendulums; (b) what observers do not see. The pendulums are set swinging in opposite phase and observed with both eyes, one eye covered by a neutral density filter ( ~ 2 log units). Observers see the pendulum bobs following each other round in a horizontal ellipse. They do not see the arms twist round each other as they should if the seen movements of the bobs were veridical. Observers are disconcerted by this inconsistency.’
LESLIE: ‘What Wilson and Robinson do not describe, however, is what observers see happening to the rods. They say that observers do not see them twisting round each other, but they do not say what observers do see.’ ‘I have therefore investigated this myself ... Equally striking is the clear perception of the rigid solid rods passing through each other. Most observers were able to find an angle of view where even the pendulum bottles appear to pass through one another despite their large size and marked surface texture.’ \citep[pp.~198--9]{Leslie:1988ct}
Note that there is a dearth of information about whether assigning and maintaining object indexes really does take into account solidity.

Compare Scholl and Mitroff’s bouncing/streaming study. This study: (i) suggests solidity may be a constraint, at least sometimes; (ii) indicates that phenomenology and object indexes may not perfectly align
Mitroff et al p. 74: ‘we induced a strong bias to consciously perceive streaming, by using smooth, constant, and reasonably fast motion. This allows us to provide the clearest possible situation in which to evaluate the relationship between conscious percepts and object files.’
Note that: The claim that some system of object indexes sometimes gives rise to phenomenal expectations does not imply that object indexes and phenomenal expectations are always aligned. Mitroff et al. (2005) construct a situation involving two objects which simultaneously undergo temporary occlusion. In this situation, perceivers’ verbal reports imply the objects’ paths crossed whereas measuring an object-specific preview benefit implies that the objects bounced off each other. The object indexes underpinning object-specific preview benefits are unlikely to be informing phenomenal expectations about objects’ movements in this situation. Object indexes and phenomenal expectations can come apart in some situations. 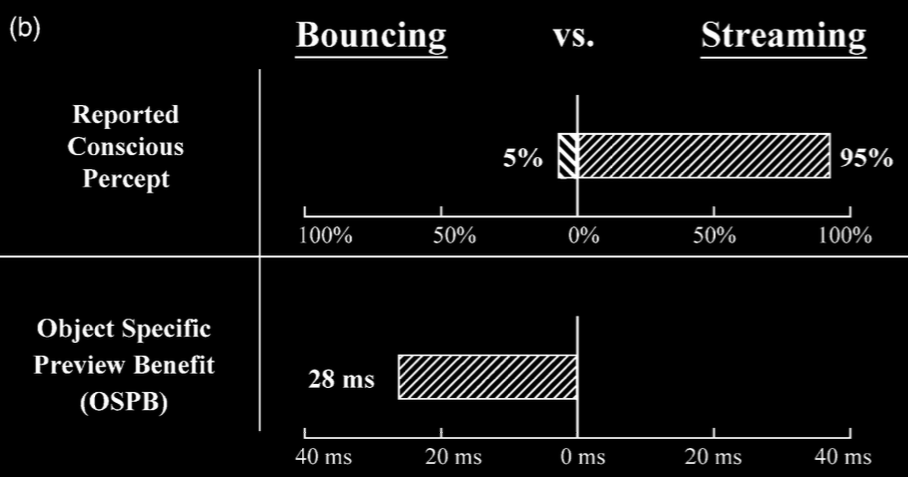 Return to the claims and Rips’ objection ...

Leslie’s informal report on the Pulfrich double pendulum illusion (which appears never to have been published) suffices to show that it was too simple to say that ‘object perception and causal perception are one and the same process’ or to talk about ‘object perception and physical reasoning’. But it remains possible that the launching effects are consequences of the ways that object indexes are assigned and maintained (although this is far from the only conclusion compatible with the limited available evidence).
Rips: ‘This possibility, though, is not one that advocates of Michotte’s hypothesis have taken up. The favored view is one in which separate modules are responsible for descriptions of objects and of their mechanical interactions, with central mechanisms then resolving potential conflicts between them. For example, Leslie (1988) argues that perceptual modules do not by themselves settle inconsistencies between the spatial positions of objects and their causal interactions. In certain illusions, adults tend to perceive solid objects passing through each other (Leslie cites the Pulfrich double-pendulum illusion; see Wilson & Robinson, 1986). Thus, the module for object tracking doesn’t prohibit interpretations of physical events that are causally impossible. Of course, people realize that such events cannot really be taking place and are surprised when they perceive them, but that is because they have principles stored in long-term memory—for example, the principle that two solid objects cannot be in the same place at the same time—that classify these events as illusions or anomalies. Leslie’s argument suggests that people individuate objects and calculate their causal relations by means of separate mechanisms; thus, we can’t count on causal constraints being part of the object-tracking module. If Leslie is right, there is reason to question Butterfill’s (2009) conjecture that ‘object perception and causal perception are one and the same process’’ (p. 421).’