We’re really close to being able to answer this first question ... (Remember Requirement 2, models) But I want to approach this indirectly by asking a related question ...

How can we test

which model of the mental physical

a process is using?

[First say what signature limits in general are]
signature limit of a model is a set of predictions derivable from the model which
Let me pause to spell out the logic of this.

These are the hypotheses I wanted to test.

Theory 1 predicts that the protagonist will J.

Response R will proceed as if the protagonist will J.

Theory 2 predicts that the protagonist will not J.

Response R will proceed as if the protagonist will not J

E.g. minimal theory of mind.
E.g. canonical theory of mind.
The response might be an explicit verbal response, a proactive gaze, or anything else that can indicate belief-tracking and its absence.
To test the hypotheses, I need to identify an area where the theories describing the models make incompatible predictions. This is a signature limit of impetus mechanics.
The fact allows me to derive different predicts from the hypotheses. 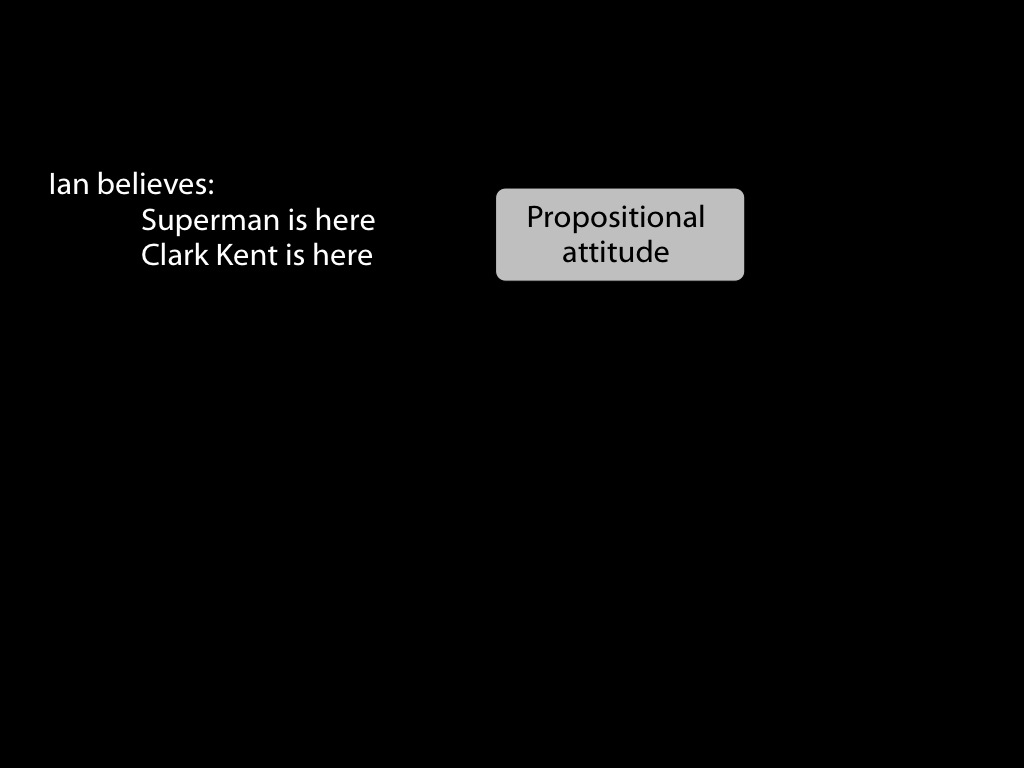 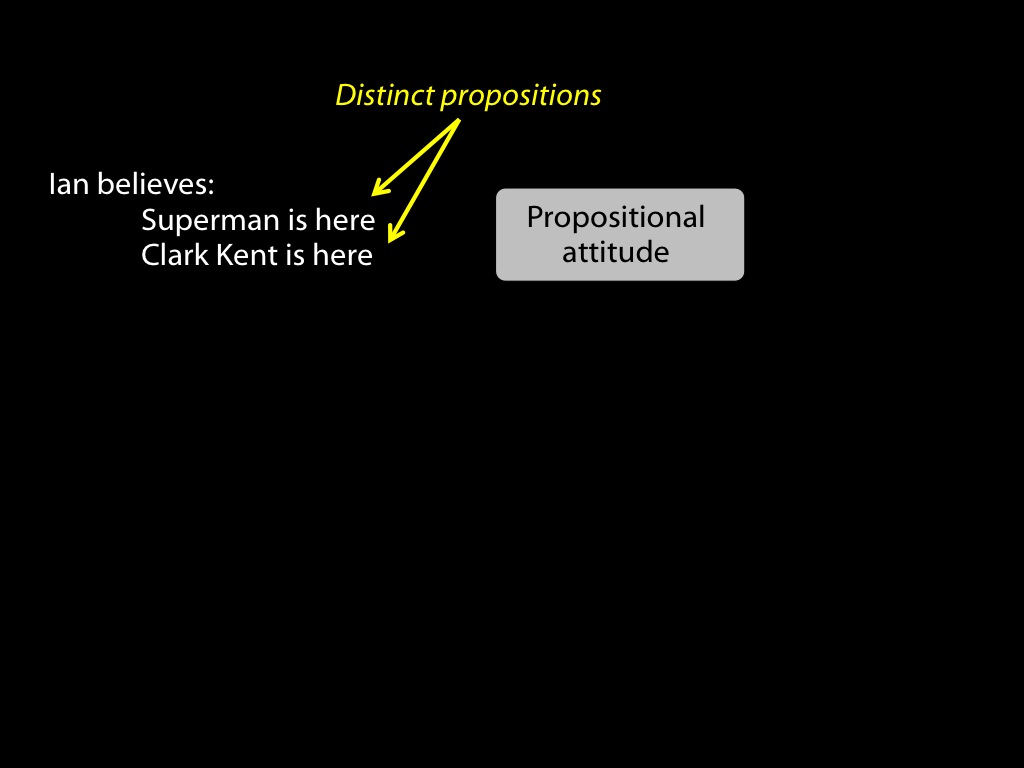 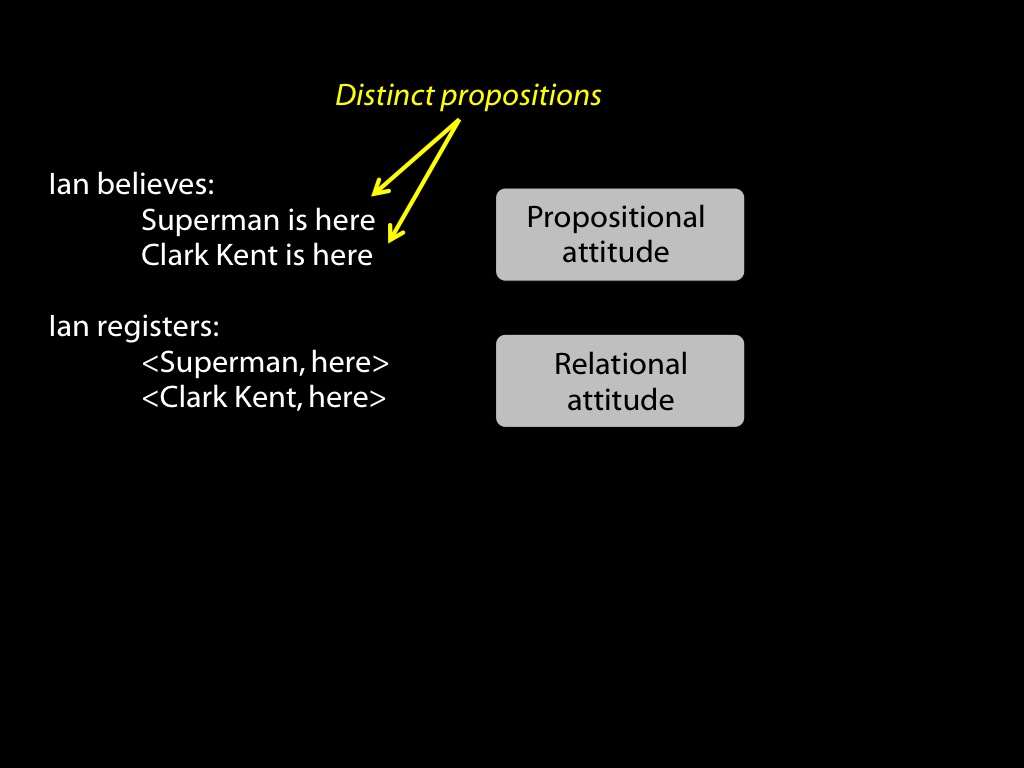 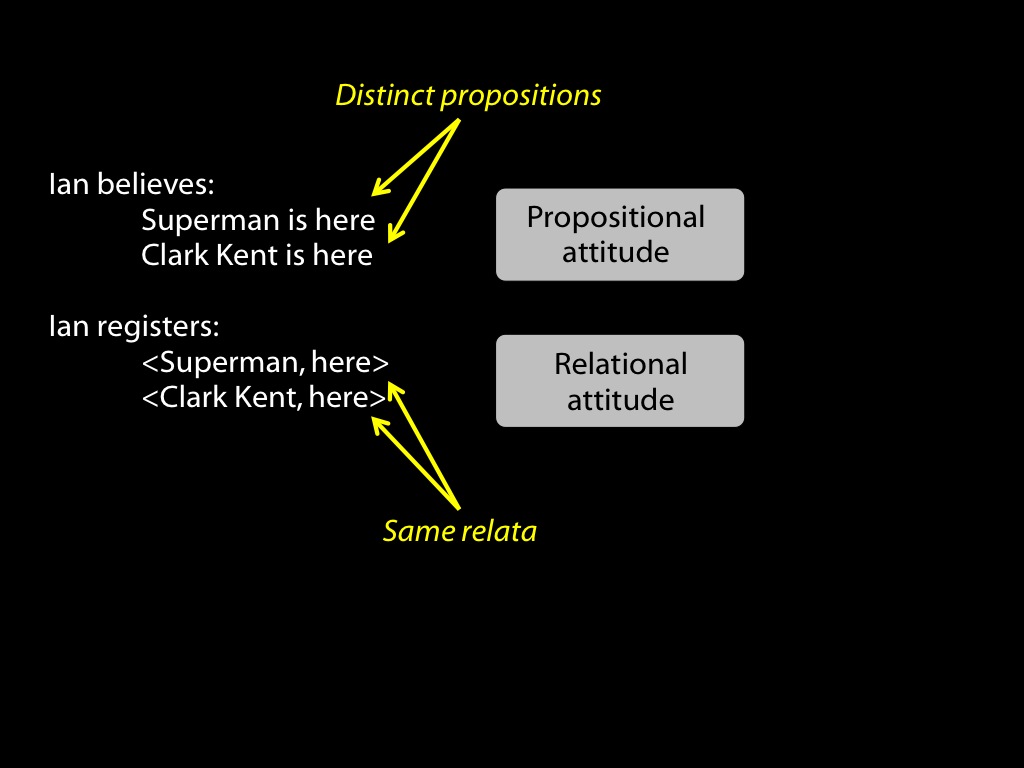 While the protagonist is present, the item is placed in Location-1.

and the item is [ moved / transformed ]. 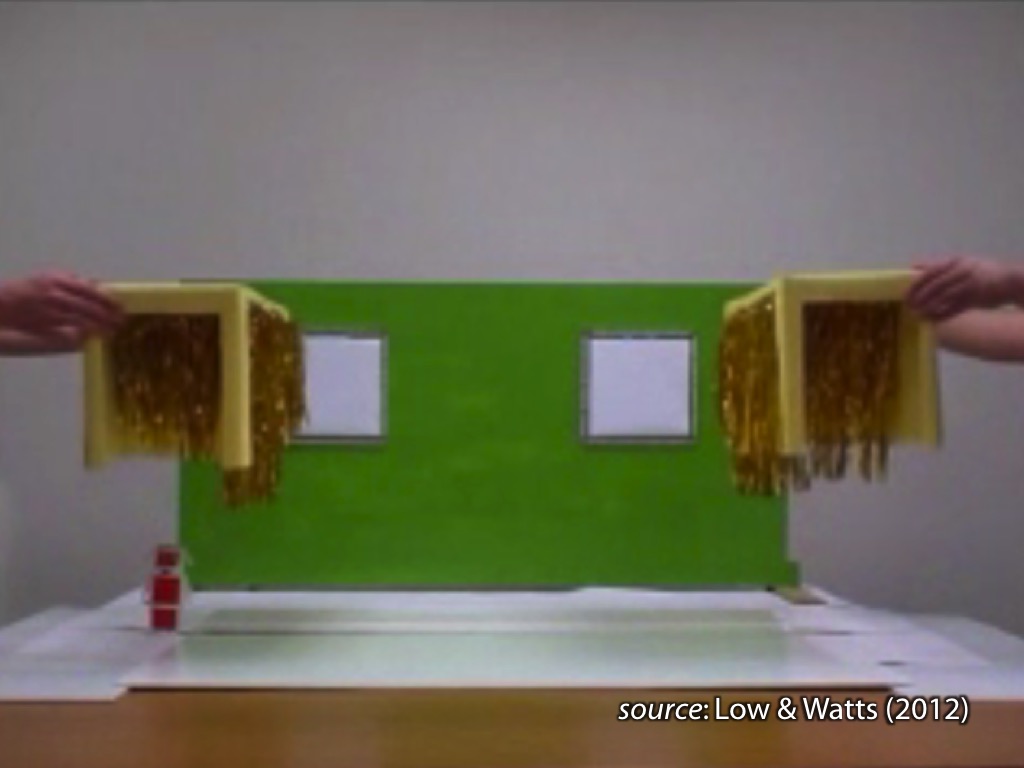 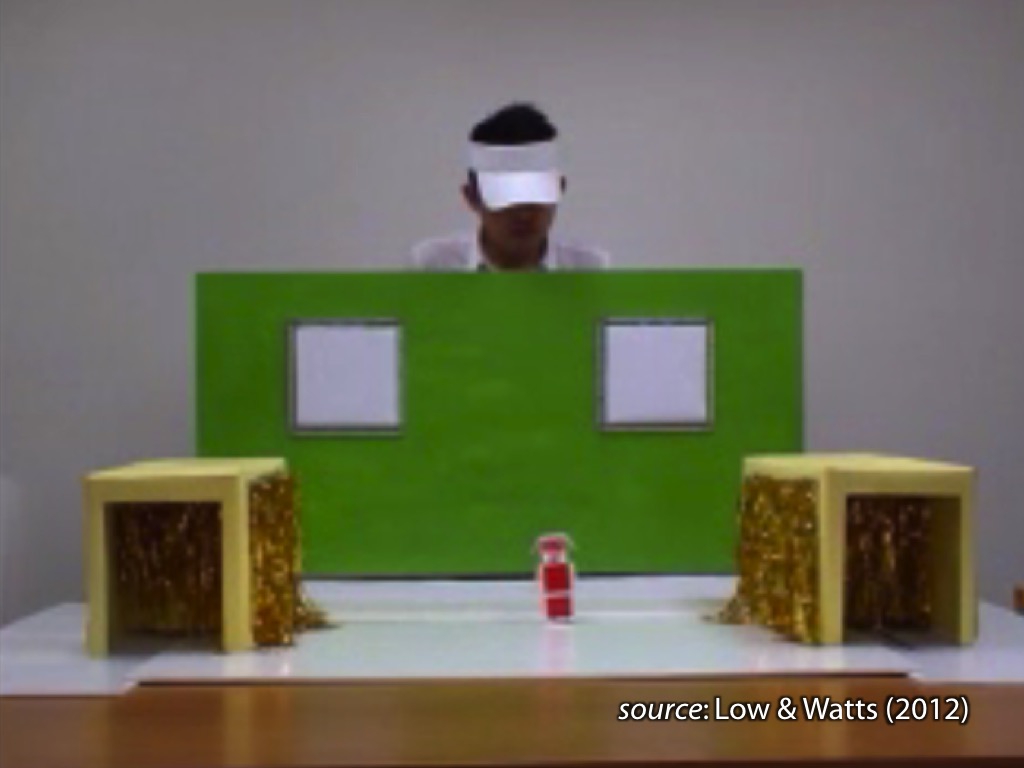 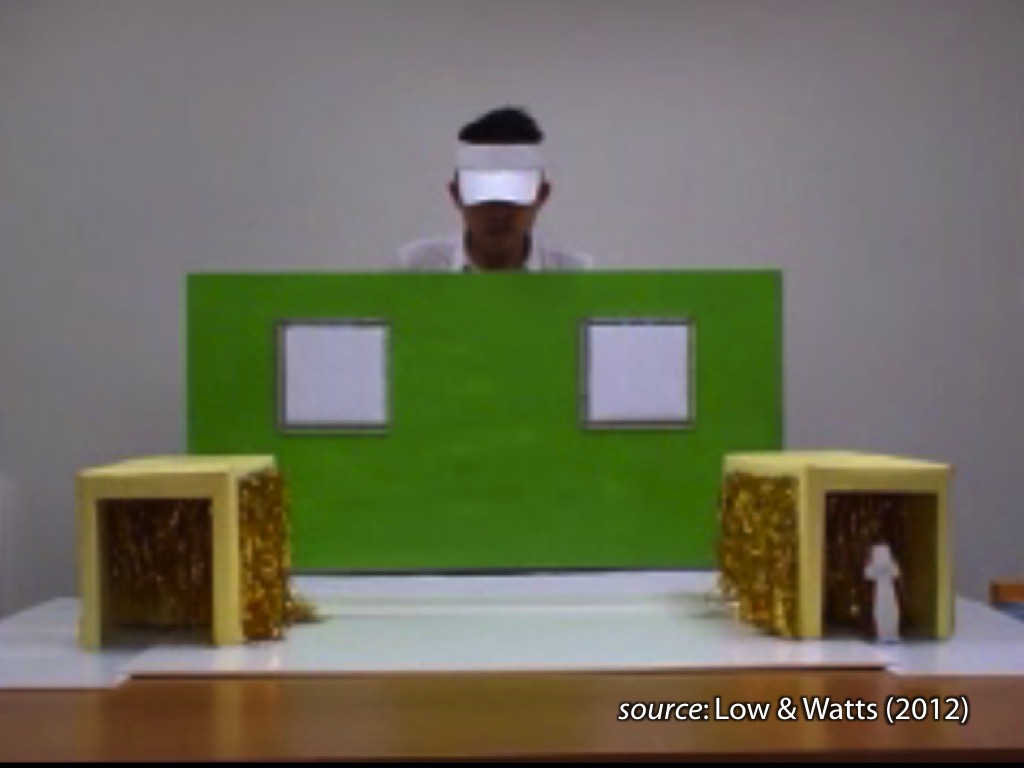 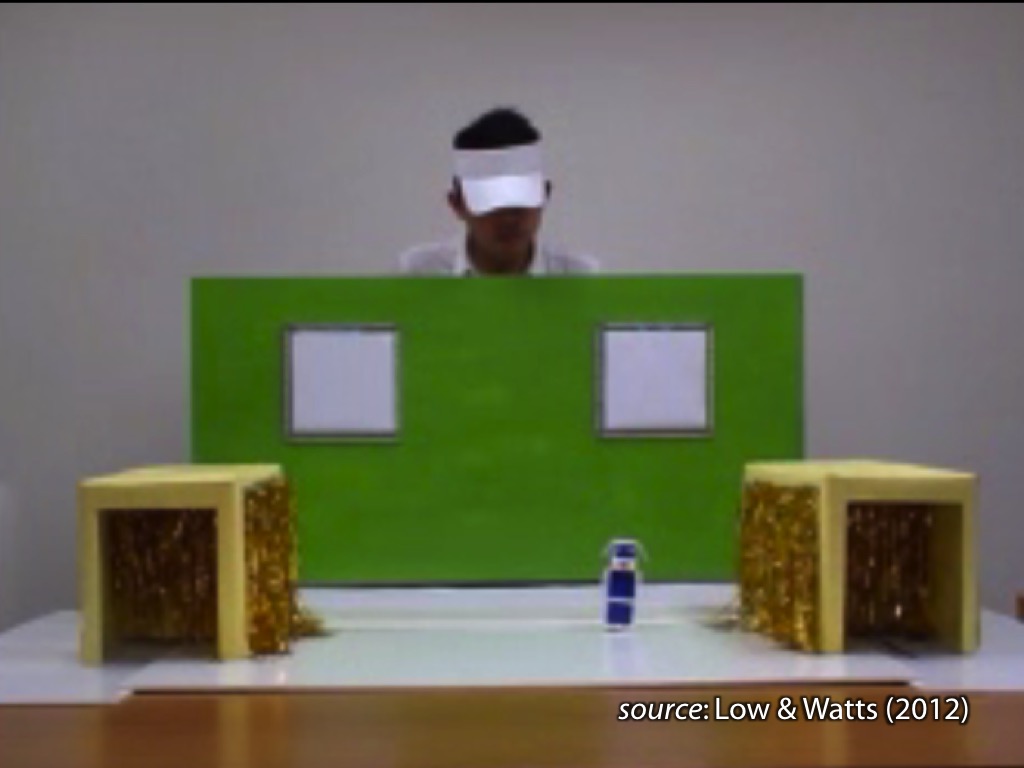 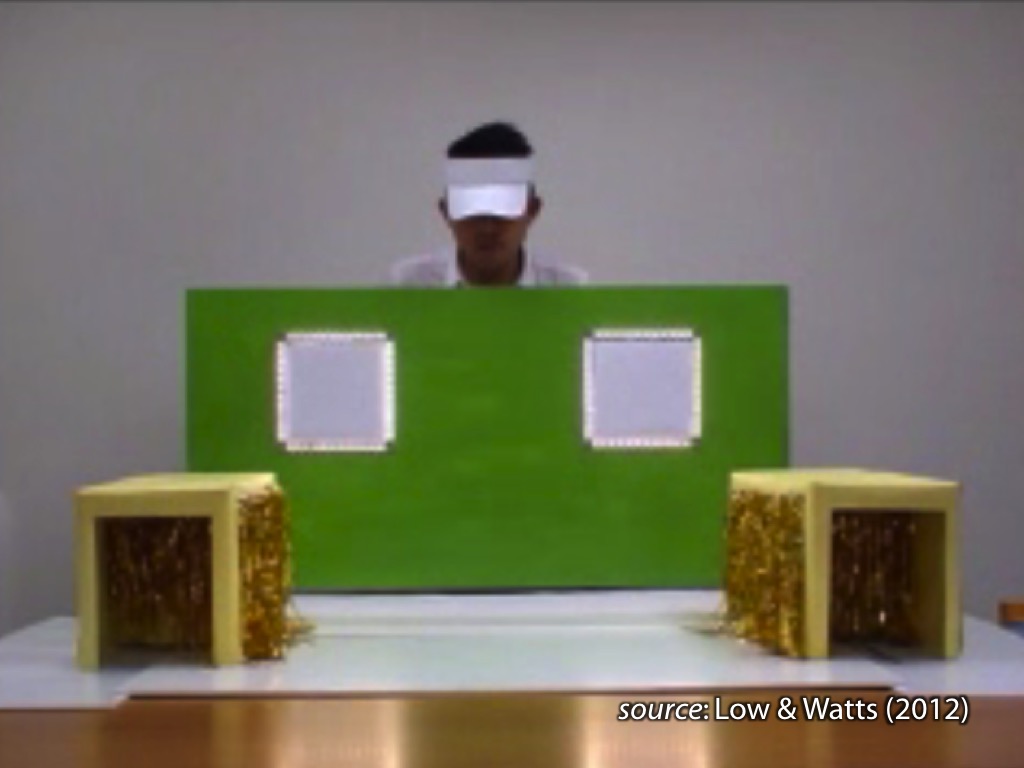 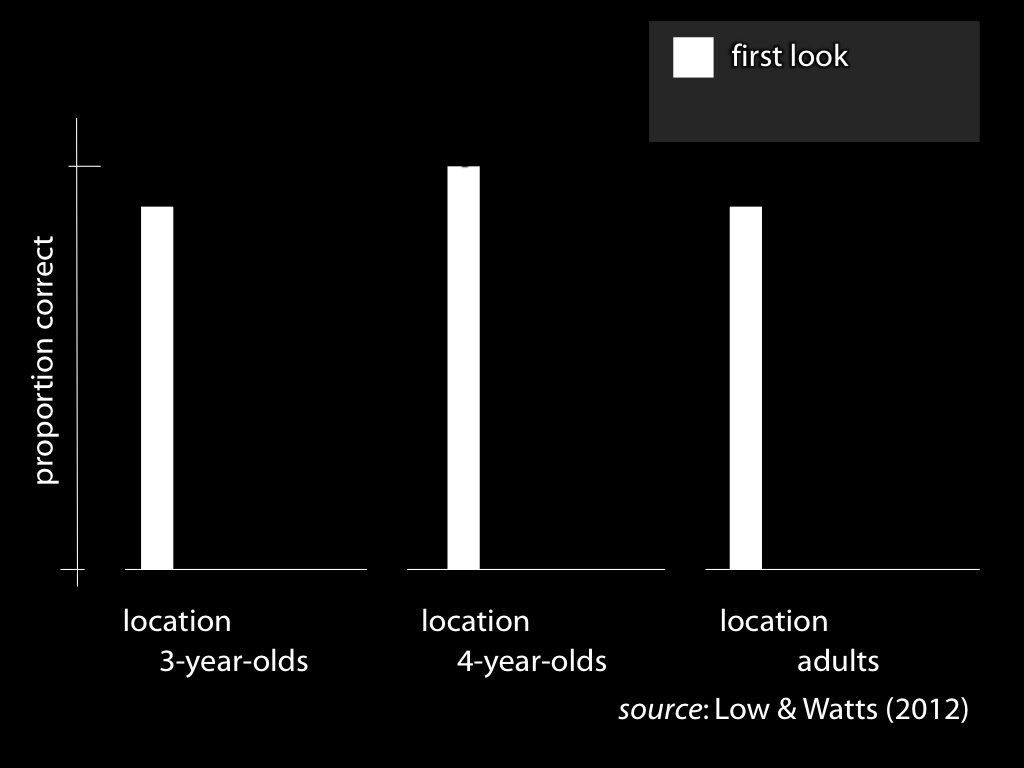 Here are standard anticipatory looking and looking time responses (Since they are approximately the same and this is rough, I'm only giving you one bar for both measures) 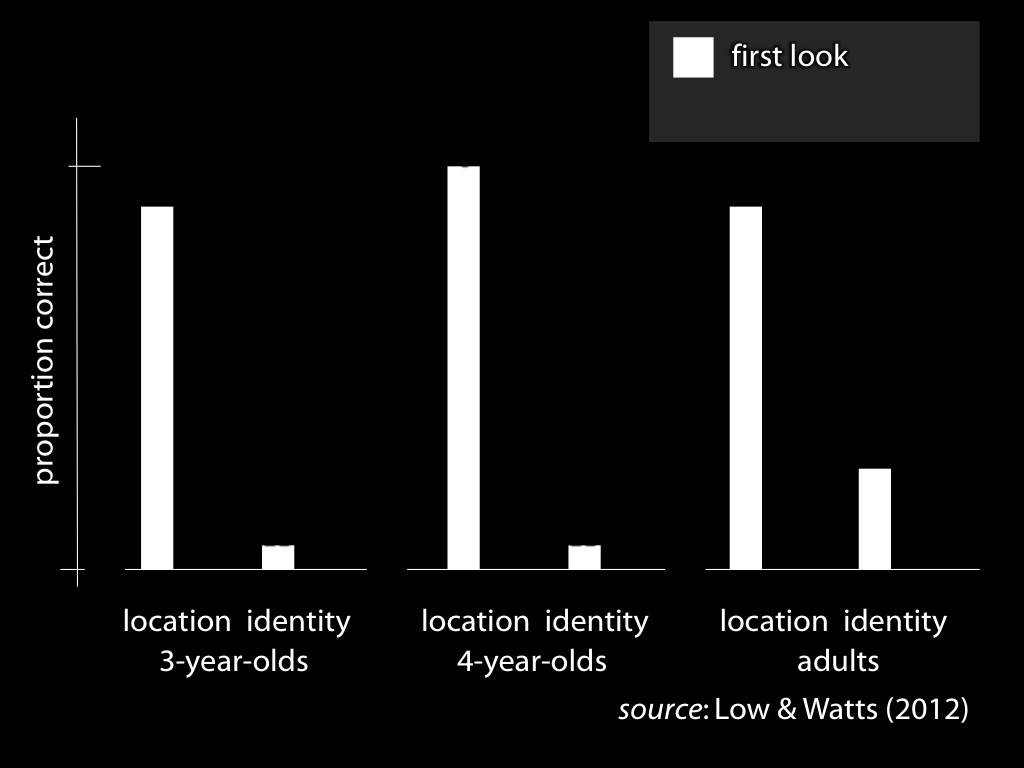 Now look at what happens when we change the task to an identity/appearance task. 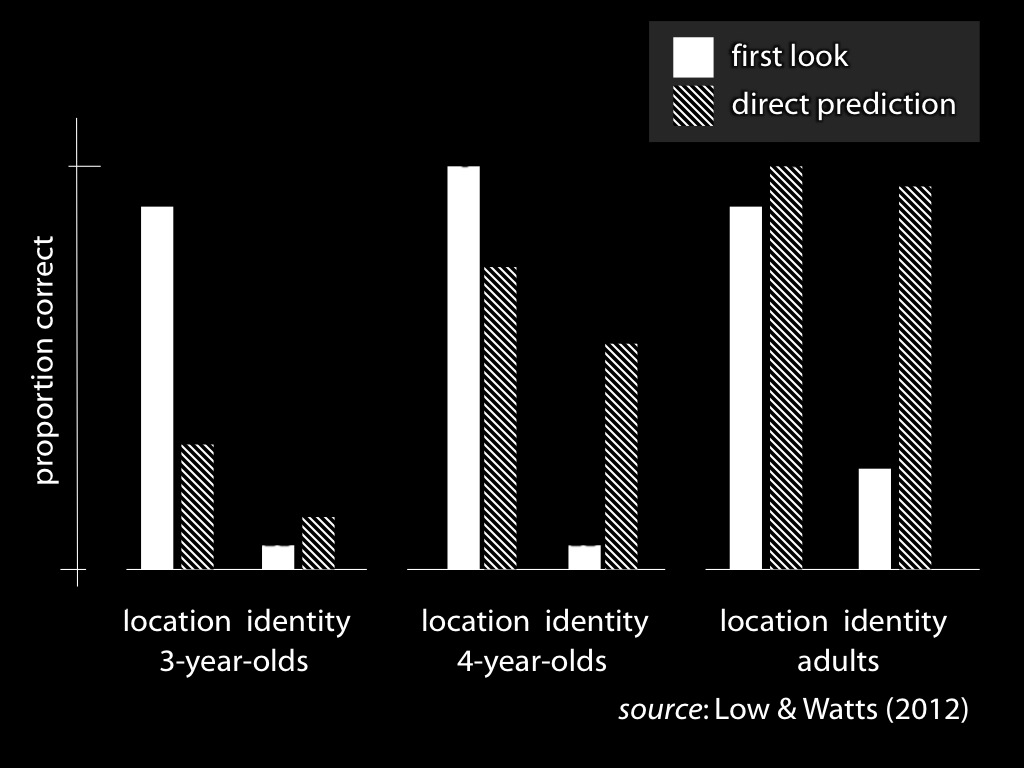 And this isn't because the subjects are confused: the switch from location to identity/appearance has no measurable effect on explicit verbal responses.
Recall this question ... ... we’re now in a position to answer it!
Three questions: \begin{enumerate} \item How do observations about tracking support conclusions about representing? \item Why are there dissociations in nonhuman apes’, human infants’ and human adults’ performance on belief-tracking tasks? \item Why is belief-tracking in adults sometimes but not always automatic? (And how could belief-tracking ever be automatic if it significantly depends on working memory and consumes attention?) \end{enumerate}

of minimal models of mind

signature limit of a model is a set of predictions derivable from the model which
As the study just mentioned \citep{kozhevnikov:2001_impetus} beautifully illustrates, identifying signature limits can make it possible to test conjectures about which theory underpins a given cognitive phenomenon.

- identity as compression/expansion [has been tested*]

- fission/fusion [is being tested*]

There is a caveat. I want to test the claim that automatic processes use minimal models of the mental. When testing limits, people have used certain measures ...

And now you can see the problem. Which of these measures are driven by automatic processes? Only for the second, looking duration, do we have evidence that it sometimes reflects processes that are automatic in false belief tasks \citep{schneider:2014_task}. 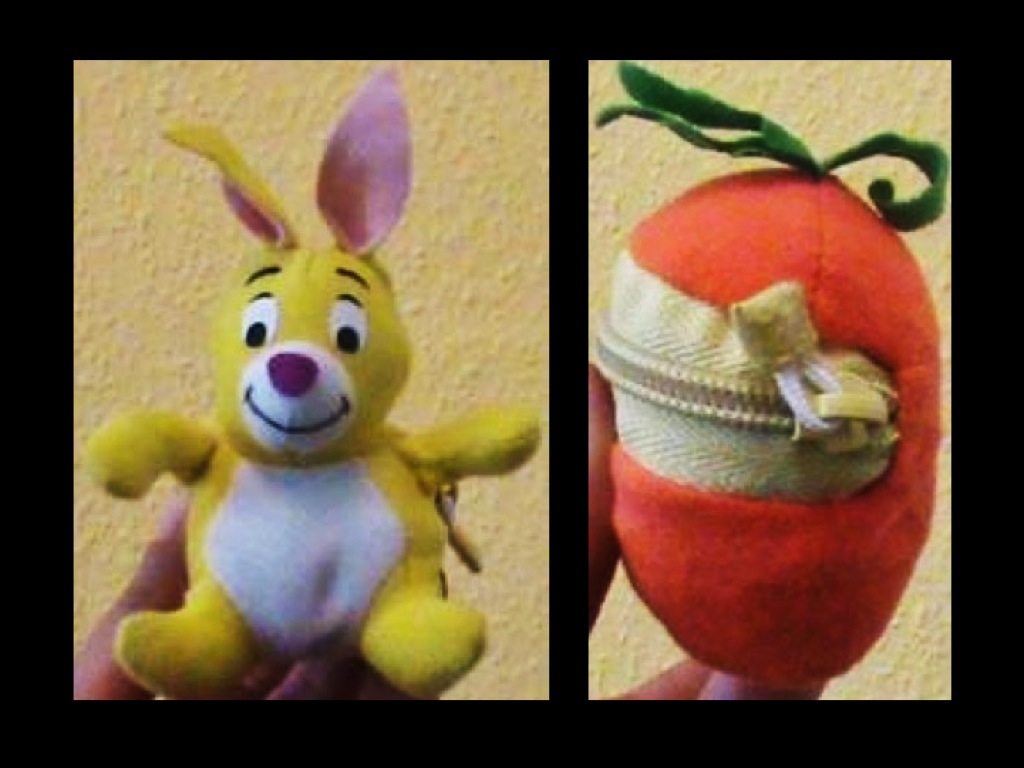 Just say that you can do this with other stimuli and paradigms, and we have done this with infants and would like to do it with adults.
These findings complicate the picture: is helping driven by automatic processes only? If not, why do we predict that the signature limit of minimal theory of mind is found in this case too? 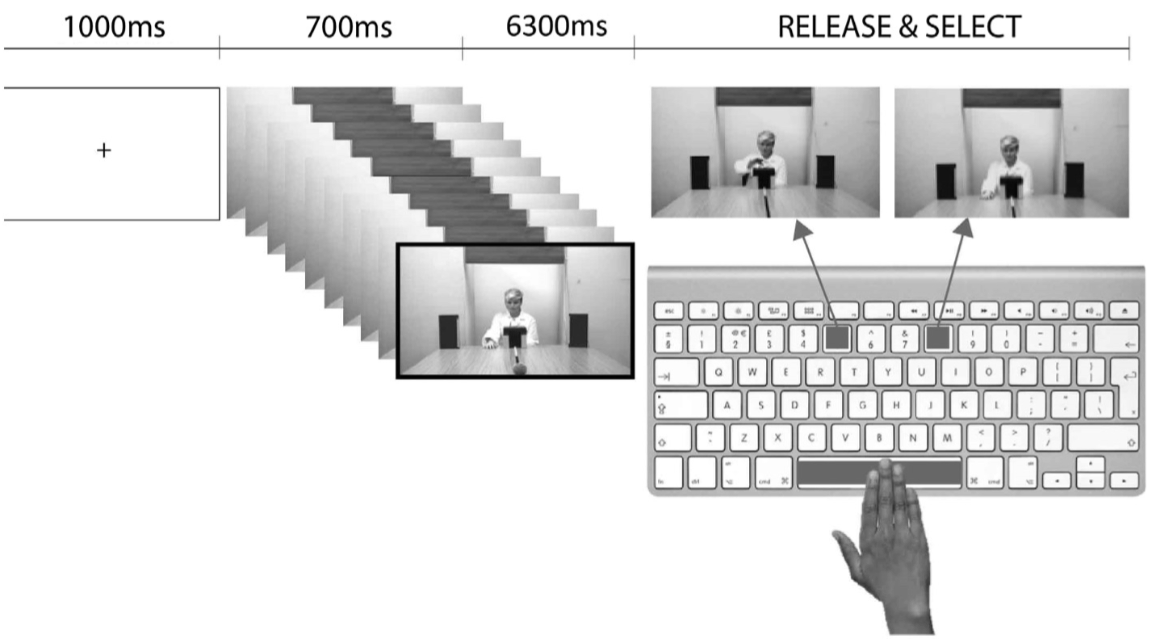 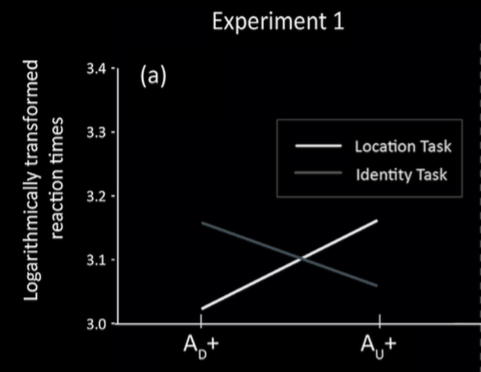 We need to be cautious in interpreting these results (as Edwards and Low were).

‘The test for a significant [...] effect is concerned only with the question of whether a true difference in response times (RTs) exists in the population, regardless of its size.

‘One can conclude from this effect only that some classification of the [actions] has happened, but [...] whether it was more [or less] accurate than in the direct task remain unknown.

To make the claim that the RTs are evidence for good [or bad] unconscious classification, [we] would have needed to show that the RTs can be used to [predict the actions].’

Scott and colleagues \citep{scott:2015_infants} provided other evidence suggesting that infants’ mindreading may be relatively sophisticated. Specifically, 17-month-olds watched a thief attempt to steal a preferred object (a rattling toy) when its owner was momentarily absent by substituting it with a less-preferred object (a non-rattling toy). Infants looked longer when the thief substituted the preferred object with a non-visually-matching silent toy compared to when the thief substituted it with a visually-matching silent toy. The authors postulated that infants can ascribe to the thief an intention to implant in the owner a false-belief about the identity of the substituted toy. The authors further suggested that infants make such ascriptions only when the substitution involves a visually-matching toy and the owner will not test whether the toy rattles on her return.
However, Scott et al.’s \citep{scott:2015_infants} explanations also require postulating that infants take the thief to be strikingly inept; despite having opportunity simply to pilfer from a closed box known to contain at least three rattling toys, the thief engages in elaborate deception which will be uncovered whenever the substituted toy is next shaken and the thief, as sole suspect, easily identified. A further difficulty is that factors unrelated to the thief’s mental states vary between conditions, such as the frequencies with which toys visually matching one present during the final phase of the test trial have rattled. These considerations jointly indicate that further evidence would be needed to support the claim that humans’ early mindreading capacity enables them to ascribe intentions concerning false beliefs involving numerical identity.
We've just seen evidence for the second claim, as promised.

Constructing minimal theories of mind yields models of the mental which

... could be used by automatic mindreading processes.

... are used by some automatic mindreading processes.

... are the only models used by automatic mindreading processes.

The evidence we have doesn’t support the third claim (that minimal theories of mind yield models which are are the only models used by automatic mindreading).
I do think there's an interesting theoretical argument for the third claim but I'm not sure how interested people are so I've left that out. (It's in an appendix.)

but using a canonical model is cognitively demanding.

[Move ahead to schneiders puzzle and then come back here.]

[*todo: lots of references missing from the following, e.g. Quereshi et al; good summary in Schniedier et al 2014 WHat do we know ... paper.]
For adults (and children who can do this), representing perceptions and beliefs as such---and even merely holding in mind what another believes, where no inference is required---involves a measurable processing cost \citep{apperly:2008_back,apperly:2010_limits}, consumes attention and working memory in fully competent adults \citealp{Apperly:2009cc, lin:2010_reflexively, McKinnon:2007rr}, may require inhibition \citep{bull:2008_role} and makes demands on executive function \citep{apperly:2004_frontal,samson:2005_seeing}.
People sometimes argue that what is cognitively demanding has nothing to do with belief ascription but extraneous demands imposed in these tasks. But there is a wide range of evidence (listed on your handout) using different paradigms and carefully controlling for just this possibility (for example, some studies compare tasks that are about beliefs with tasks that are as similar as possible but not about beliefs).
It makes sense to suppose that these cognitive demands are intrinsic rather than extraneous. Compare representing beliefs in a canonical model with measuring temperature using centigrade ...
Let me say one more thing about the cognitive demands of using a canonical model of mental states for mindreading ...

- it makes people slow down

... it makes people slow down \citep{Wel:2013uq}. (Also note that in \citet{lin:2010_reflexively}, even for people with high working memory capacity where no additional cognitive load is imposed, it takes significantly longer to follow an instruction that requires visual perspective taking than to follow an instruction that does not.)
Objection: ‘the theoretical arguments offered [...] are [...] unconvincing, and [...] the data can be explained in other terms’ (\citealp{carruthers:2015_two}; see also \citealp{carruthers:2015_mindreading}).
‘A cooperative multi-system architecture is better able to explain infant belief representation than a parallel architecture, and causal representation, schemas and models provide a more promising basis for flexible belief representation than does a rule-based approach of the kind described by Butterfill and Apperly’ (\citealp{christensen:_twoa}; see also \citealp{michael:2016_flexible,michael:2013_mindreading}).