The Launching Effect and Perceptual Processes 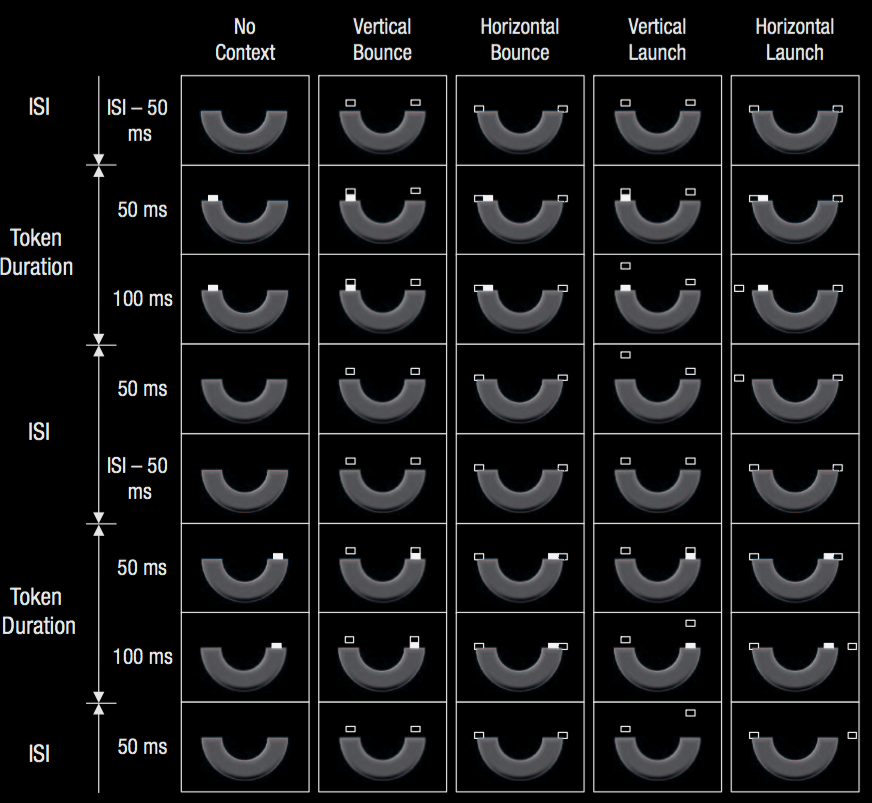 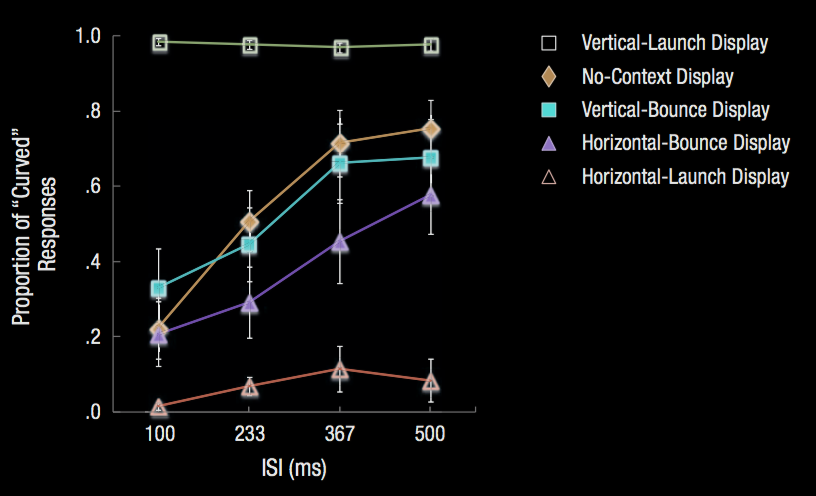 Guess how the launching effect works! A natural thought is this: first you perceive objects, then you identify causal interactions based on contiguity etc. This turns out to be completely wrong.

Guess how the launching effect works ...

The impression of launching is judgement-independent. So it can't be a consequence of thinking about the interaction. Still, it might be a consequence of perceiving objects in certain relations to each other. However a key finding shows that this is wrong. Surprisingly, we don't first perceive objects and then get the launching effect; rather, the launching effect is tied up with perceptual process of identifying objects' surfaces. 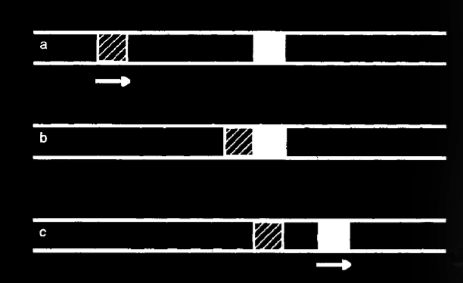 [I'm about to talk about illusory causal crescents. I first show them two videos. This is a full overlap video. You can drag the slider to show them that it's full overlap, but first ask them what they see.] [Static images follow in case video doesn't work.]

Normally, if the two balls overlap completely, subjects report seeing a single object changing colour.
[This is a causal capture video with full overlap. Focus on the top sequence. Tell me what you saw! You can drag the slider to show them that it's full overlap, but first ask them what they see.] [Static images follow in case video doesn't work.]

Normally in this case people report the impression that the top sequence collided. That is, they didn't pass, they collided.

Causal capture is described by \citep{Scholl:2002eb}. As I said, normally, if the two balls overlap completely, subjects report seeing a single object changing colour. But if we show subjects a sequence like the launching effect but where the first square overlaps the second's position before it moves. When this event is shown is isolation almost all subjects see it as a single object changing colour. But when the event is shown with an unambiguous launching effect nearby, almost all subjects now see the 'overlap' event as a launching. Causal capture means that we can show subjects a sequence with complete overlap and still have the report a causal effect.
Why do we care about causal capture? Because it gives rise to illusory causal crescents ...
[Now I'll explain illusory causal cresecents.] 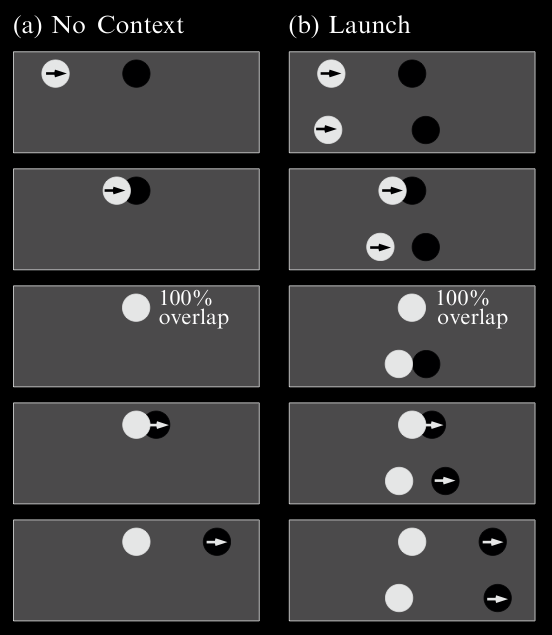 Here's a static image representing the sequence you saw first, when there was full overlap.
‘when there is a launching event beneath the overlap (or underlap event) timed such that the launch occurs at the point of maximum overlap, observers inaccurately report that the overlap is incomplete, suggesting that they see an illusory crescent.’ \citep[p.\ 461]{Scholl:2004dx}
Why does the illusory causal crescent appear? Scholl and Nakayama suggest a ‘a simple categorical explanation for the Causal Crescents illusion: the visual system, when led by other means to perceive an event as a causal collision, effectively ‘refuses’ to see the two objects as fully overlapped, because of an internalized constraint to the effect that such a spatial arrangement is not physically possible. As a result, a thin crescent of one object remains uncovered by the other one-as would in fact be the case in a straight-on billiard-ball collision where the motion occurs at an angle close to the line of sight.’ \citep[p.\ 466]{Scholl:2004dx}
*here or later? Contrast Spelke’s view. ‘objects are conceived: Humans come to know about an object’s unity, boundaries, and persistence in ways like those by which we come to know about its material composition or its market value.’ \citep[p.\ 198]{Spelke:1988xc}.

(*This figure just shows when the overlap event was perceived as causal.)
The question is, How is launching detected? For example, does it involve perceptual processes? Three bits of evidence are relevant ...

I think there's something here that should be uncontroversial, and something that's more controversial.
It can’t be knowledge, but let’s not worry about that because there’s a worse objection.

‘This possibility, though, is not one that advocates of Michotte’s hypothesis have taken up. The favored view is one in which separate modules are responsible for descriptions of objects and of their mechanical interactions, with central mechanisms then resolving potential conflicts between them. For example, Leslie (1988) argues that perceptual modules do not by themselves settle inconsistencies between the spatial positions of objects and their causal interactions. In certain illusions, adults tend to perceive solid objects passing through each other (Leslie cites the Pulfrich double-pendulum illusion; see Wilson & Robinson, 1986). Thus, the module for object tracking doesn’t prohibit interpretations of physical events that are causally impossible. Of course, people realize that such events cannot really be taking place and are surprised when they perceive them, but that is because they have principles stored in long-term memory—for example, the principle that two solid objects cannot be in the same place at the same time—that classify these events as illusions or anomalies. Leslie’s argument suggests that people individuate objects and calculate their causal relations by means of separate mechanisms; thus, we can’t count on causal constraints being part of the object-tracking module. If Leslie is right, there is reason to question Butterfill’s (2009) conjecture that ‘object perception and causal perception are one and the same process’’ (p. 421).’
Response: it was too simple to say that ‘object perception and causal perception are one and the same process’ or to talk about ‘object perception and physical reasoning’ because object perception is a complicated thing with many aspects. What Carey and Spelke (and following them, Butterfill) should have said is that there is a system of object indexes which assigns indexes in ways that reflects physical constraints such as solidity on objects’ motions, and this is what gives rise to the launching effect.
The question is, How is launching detected? For example, does it involve perceptual processes? Three bits of evidence are relevant ...

Answering the second question gives us a hint about this ...
Ingeniously, Michotte compares launching with the movement of a single object. The single object moves half way across a screen then pauses before continuing to move. Michotte found that the longest pause between the two movements consistent with subjects experiencing them as a single movement is around 80ms, exactly the longest pause consistent with experiences characteristic of launching \citep[pp.\ 91--8, 124]{Michotte:1946nz}. Accordingly, the experience characteristic of launching appears to require that the two movements be experienced as uninterrupted—--this is why they can be separated by a pause of up to but no longer than 80ms.
But what is the significance of the fact that you get a launching effect only when the movements are perceptually consistent with the movements of a single object? It‘s that no delay is perceived.
Ok, but what is the nature of these perceptual processes? Object indexes ...