Descision Theory Is Agnostic about Processes

You might have been interpreting decision theory as an account of how people figure out what to do ...

... but decision theory is agnostic about processes.

On explanation: ‘Many events and outcomes prompt us to ask: Why did that happen? [...] For example, cutthroat competition in business is the result of the rivals being trapped in a prisoners’ dilemma’

Few would hold that game theory is providing an account of how businesses figure out what to do. After all, few would hold that businesses (as opposed to the people who run them) figure things out.
The explanation does not require that any of the players are actually thinking along the lines a game theorist would think. Nor even that the players are capable of thinking.

Games with the Prisoner’s Dilemma structure arise in:

There is clearly no claim that the same kinds of processes underpin the choices made in each of these cases. Suppose, for the sake of illustration, that game theory can explain otherwise unexpected patterns in performance in each of these cases. What else follows about the proceses underlying the behaviours? Nothing.
Game theory provides a way to identify patterns in behaviours. It does not attempt to explain the underlying causes of those patterns, which may differ between entities.
If we look at game theory more generally, we find that game theoretic analysis has been applied to ‘the formation and propagation of patterns in microbial populations’ \citep[e.g.][]{reichenbach:2007_mobility}.

2. The explanations are of the same type in every case. 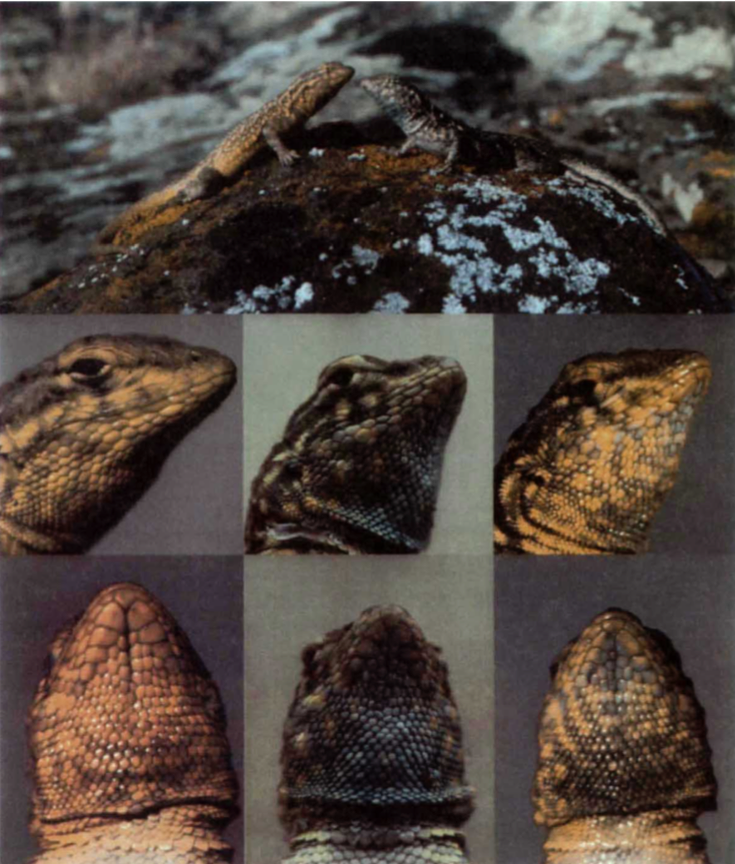 I couldn’t resist this one ... game theory (rock-paper-scissors specifically) has been used to explain ‘evolutionary stable strategy model to a three-morph mating system in the side-blotched lizard’ \citep{sinervo:1996_rock}. (The ones on the right resemble sexually receptive females morphologically; they are ‘sneakers’.)

Decision theory is agnostic about processes.

What’s the message? Decision theory is agnostic about processes.
Let’s have the argument one more time ...

Compare explanation of patterns of behaviour in:

In explaining lizard morphology, it would be strange to think that the behaviours are a result of anything cognitive at all. By contrast, in the case of humans, and perhaps other animals, there are supposed to be cognitive factors involved.

But psychological sciences are not agnostic about processes ...