A Dual Process Theory of Mindreading

An immediate problem is, Which one or several of these features should we appeal to in characterising implicit mindreading? Everyone seems to have their own ideas.
Another reason for doubting providing a list of features is enough has been brought into sharp focus by criticisms of 'two systems' approaches.
\subsection{Objection}

‘we wonder whether the dichotomous characteristics … are … perfectly correlated

To me, a more pressing problem is that ...
None of these properties can explain why there is an interaction with age with respect to particular measures of belief tracking,
Nor can they explain why there are dissociations in adults between performance on different measures.
For instance, what had domain specificity
or limited accessibility got to do with the fact that adults’ proactive gaze and response times fail to track false beliefs in some contexts? Would the theory be any different if proactive gaze were aligned with verbal responses?

We need to make a fresh start in distinguishing implicit from explicit mindreading ... 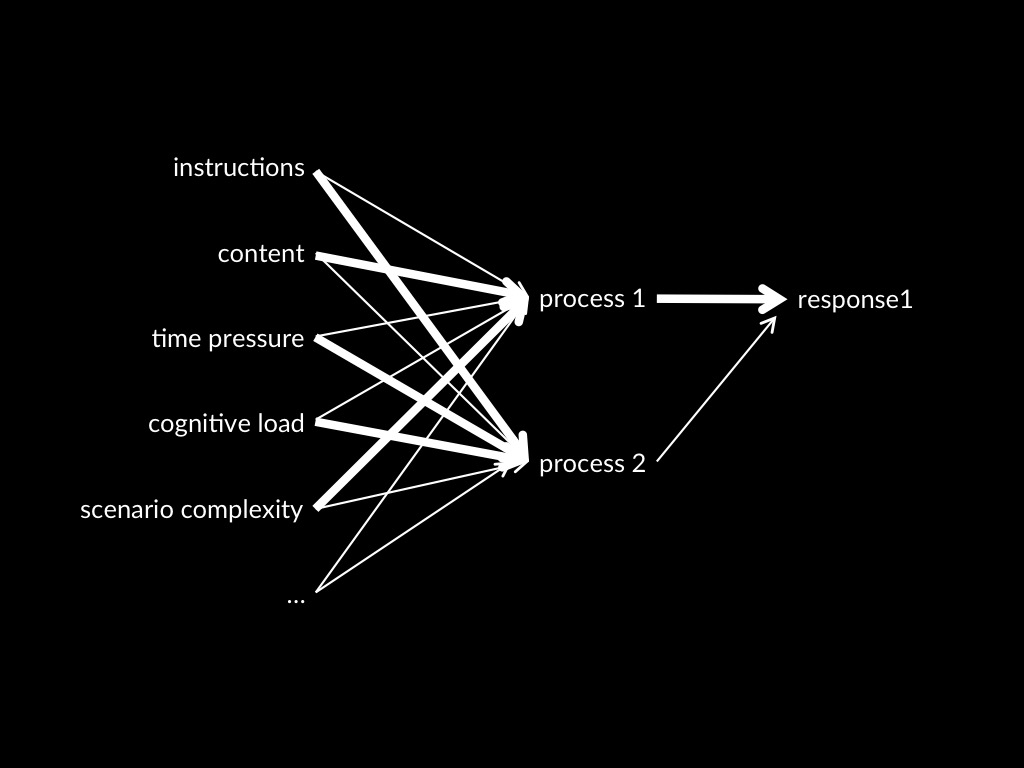 Start with a simple causal model.
‘response 1’ is a variable representing which response the subject will give. [Which values it takes will depend on what sort of response it is (e.g. a verbal response, proactive gaze, button press.) We can think of it as taking three values, one for correct belief tracking, one for fact tracking, and one for any other response.]
‘process 1’ and ‘process 2’ are variables which each represent whether a certain kind of mindreading process will occur and, if so, what it’s outcome is.
And the arrows show that the probability that response 1 will have a certain value is influenced by the value of the variables process 1 and process 2 (and by other things not included in the model). So it should be possible to intervene on the value of ‘process 1’ in order to bring about a change in the value of ‘response 1’.
[I’ve used thicker and thinner arrows informally to indicate stronger and weaker dependence. Strictly speaking the width has no meaning and this model doesn’t specify exactly how the values of variables are related, only that they are.] 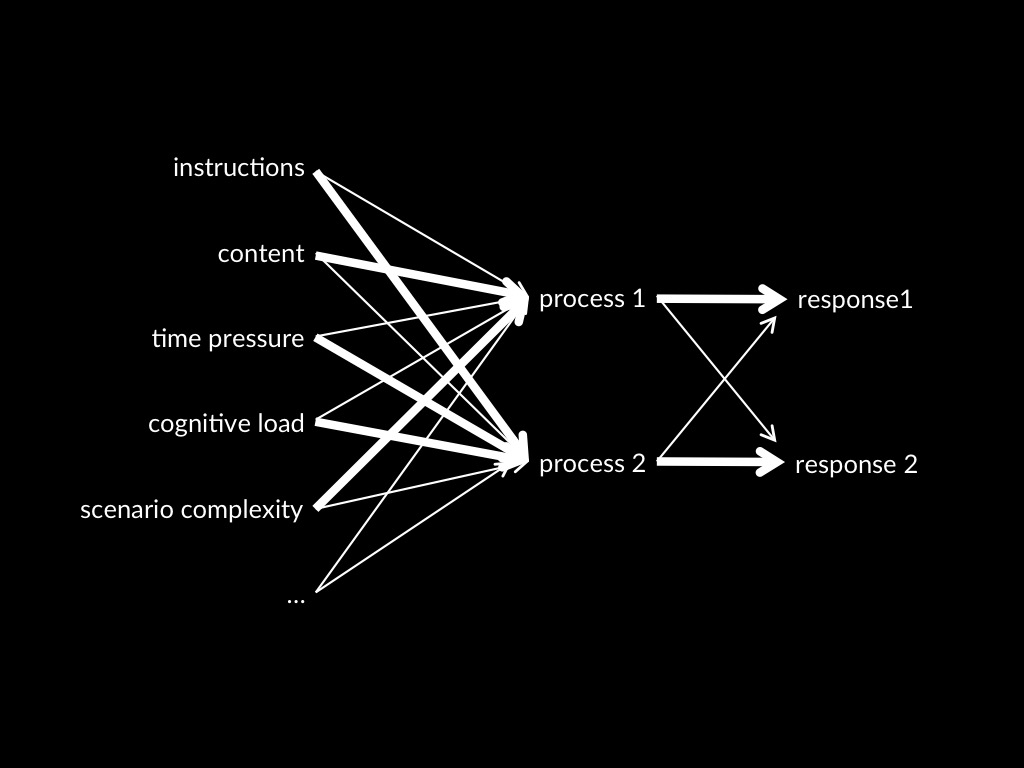 Of course, much the same is true for ‘response 2’ as well. It’s just that the changing the values of other variables will have different effects on the values of ‘response 1’ and ‘response 2’.
[Limit: this depiction ignores time, which is of course critical.]

So what does a Dual Process Theory of Mindreading claim? The core claim is just this:

Two (or more) mindreading processes are distinct:
the conditions which influence whether they occur,
and which outputs they generate,
do not completely overlap.

\textbf{You might say, this is a schematic claim, one totally lacking substance.} You’d be right: and that’s exactly the point.
A key feature of this Dual Process Theory of Mindreading is its \textbf{theoretical modesty}: it involves no a priori committments concerning the particular characteristics of the processes. 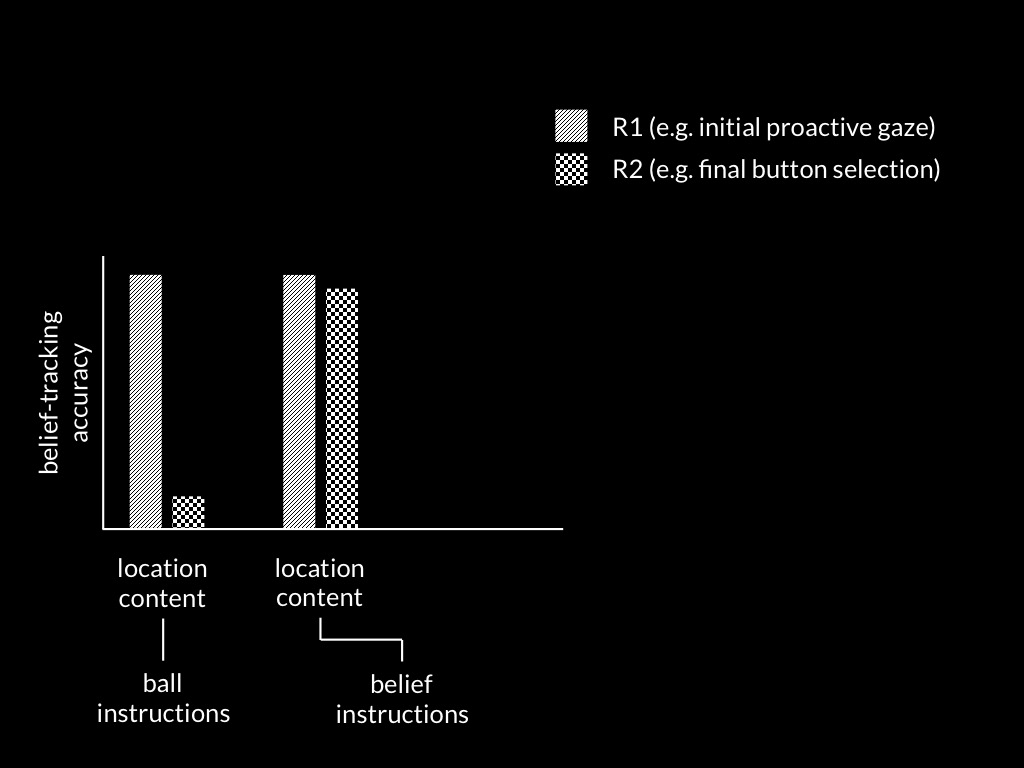 First, the conditions under which one or another response type tracks beliefs should vary.
1.a E.g. changing the \textbf{instructions} should reduce the probability that responses of one type will track beliefs without much affecting the probability that responses of the other type will track belief.
Evidence for this includes studies by Schenider et al 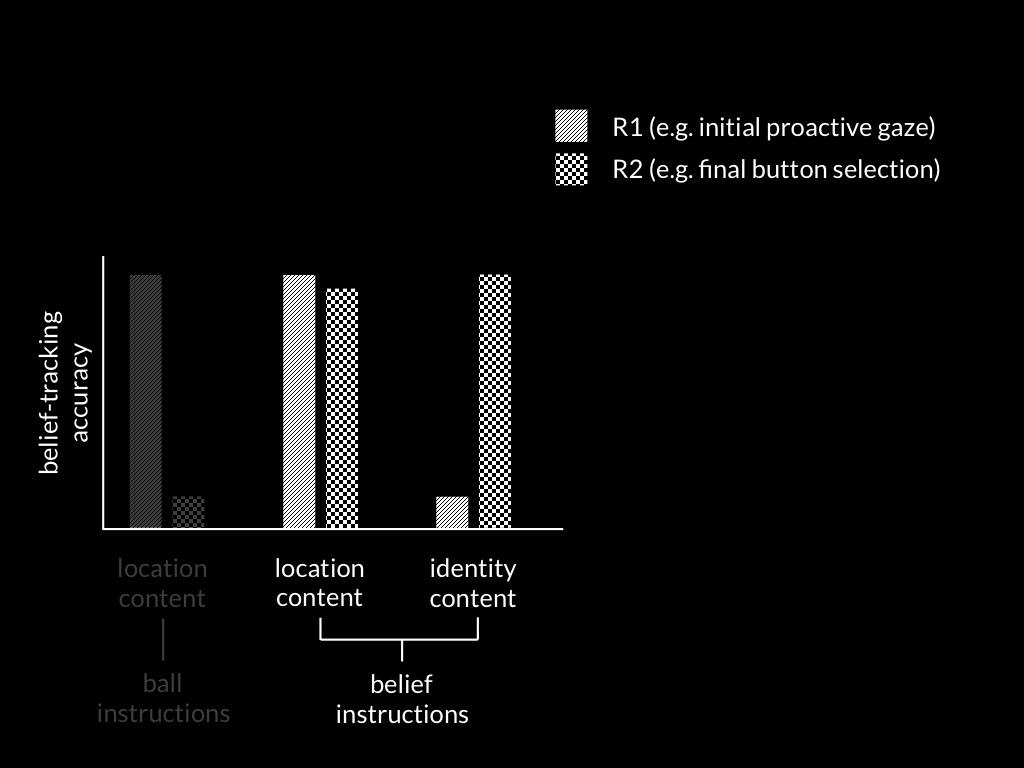 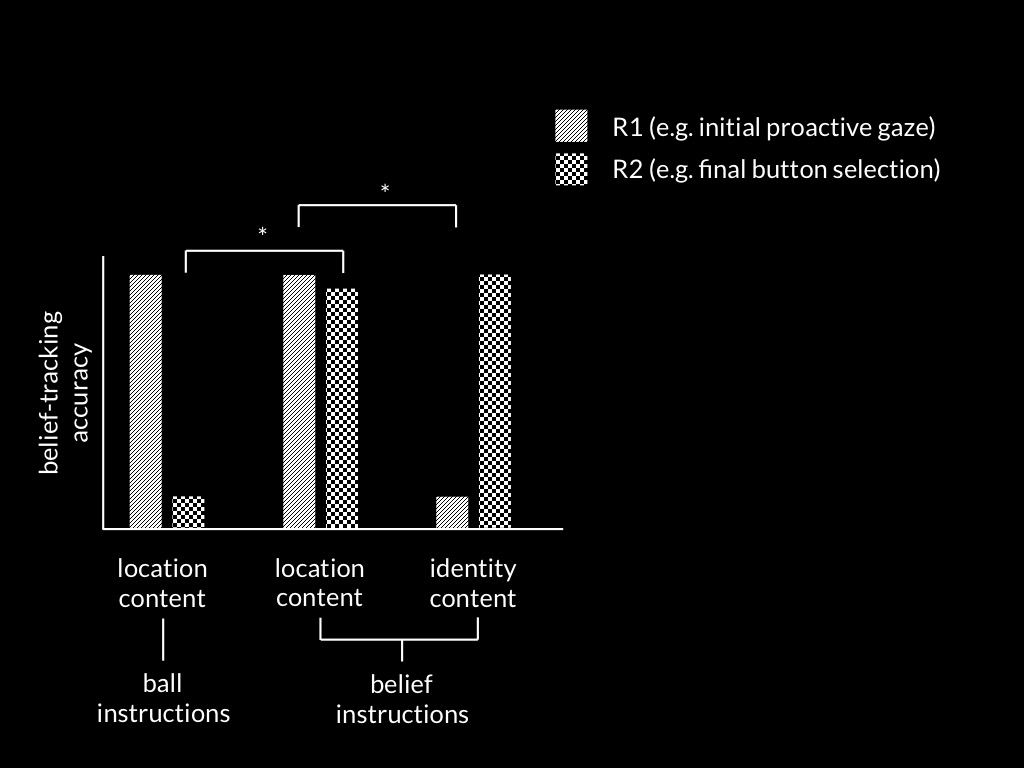 1a+b. And, ideally, it should be possible find different conditions that reduce the probability that different responses track beliefs. 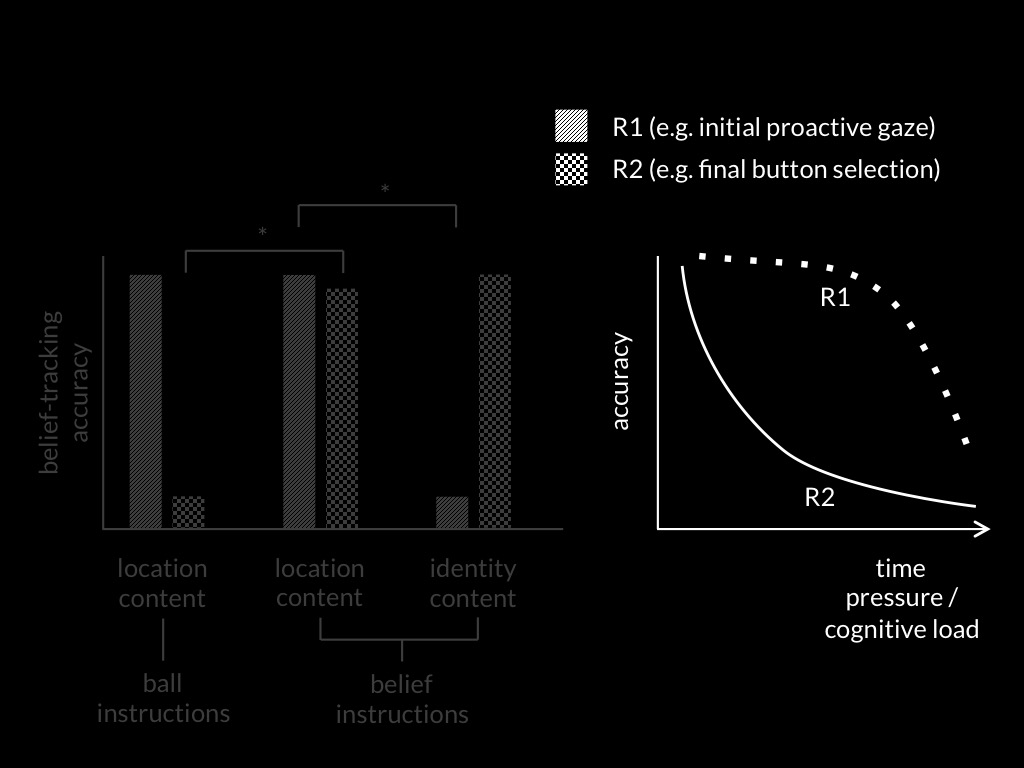 Further, the probability that responses of these two types track beliefs should be differently affected by factors such as time pressure and cognitive load. (It isn’t important that either is entirely unaffected; what matters is just that the effects are different.)
As far as I know we don’t yet have direct evidence for this, because few studies have compared what happens to two response types as factors like time pressure or cognitive load are varies. There is, of course, some evidence that responses of some types are less susceptible to cognitive load than others (e.g. \citet{qureshi:2010_executive} on L1 VPT). 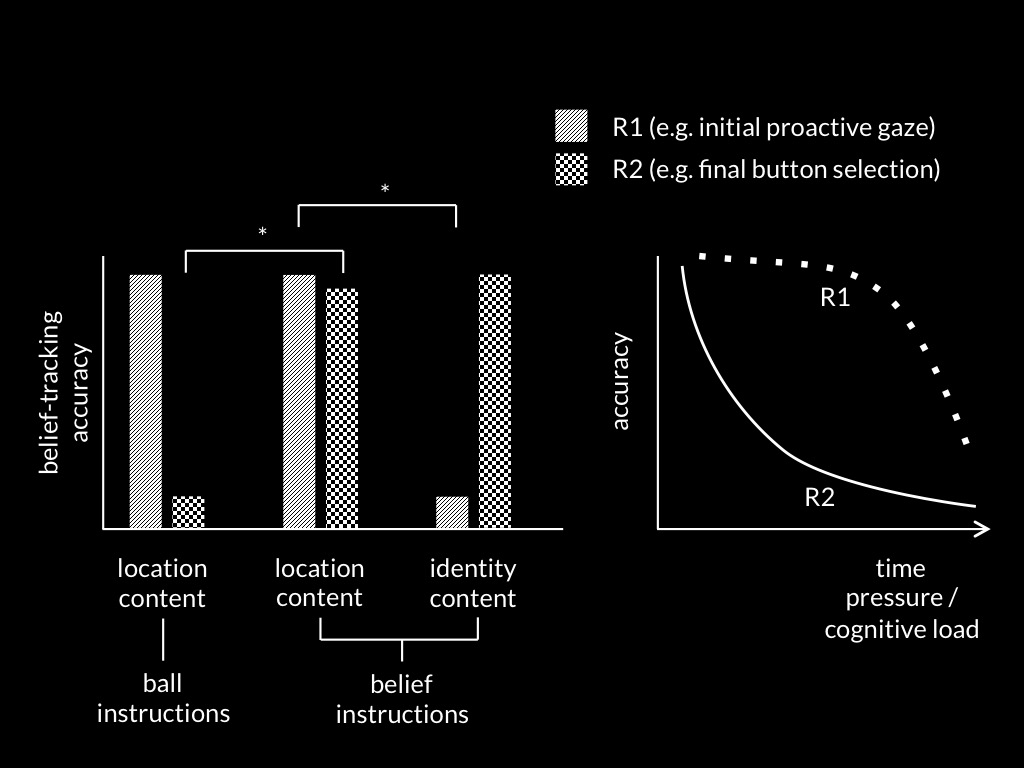 So far I’ve been working with a simplifying assumption about the relation between types of response and kinds of process. 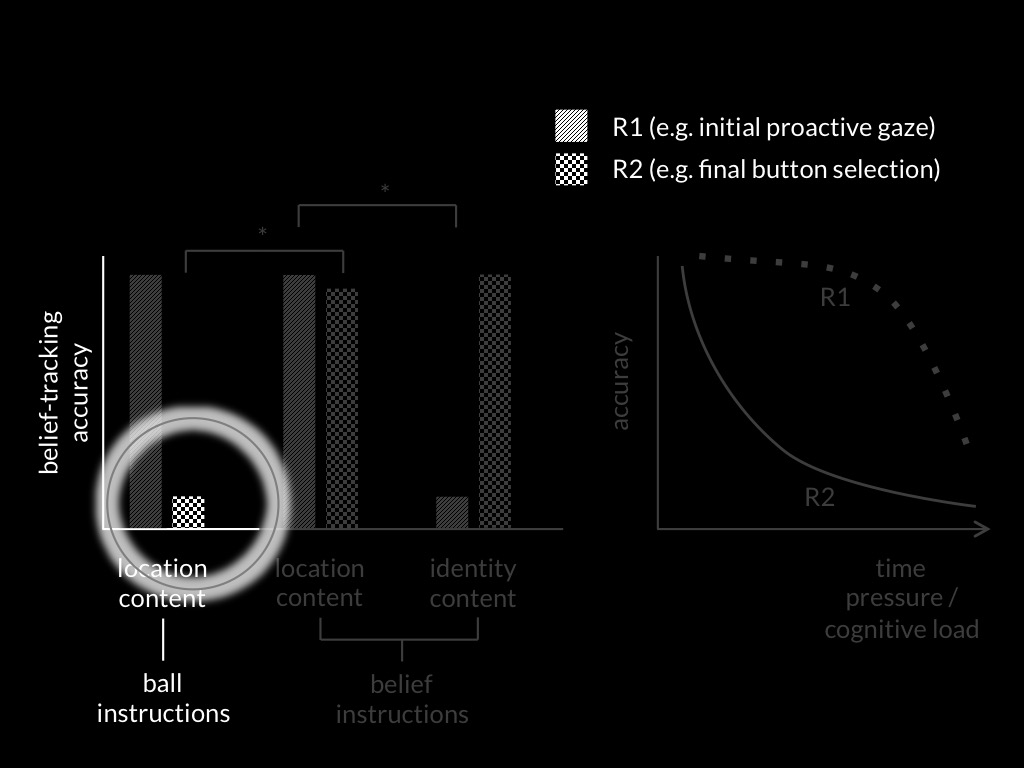 To illustrate, take the case where we instruct subjects to track the location of a ball. Subjects are asked to press a button to indicate whether a ball is present or absent. We know that button selection will not track beliefs when subjects are not under time pressure. But what happens if we increase time pressure. 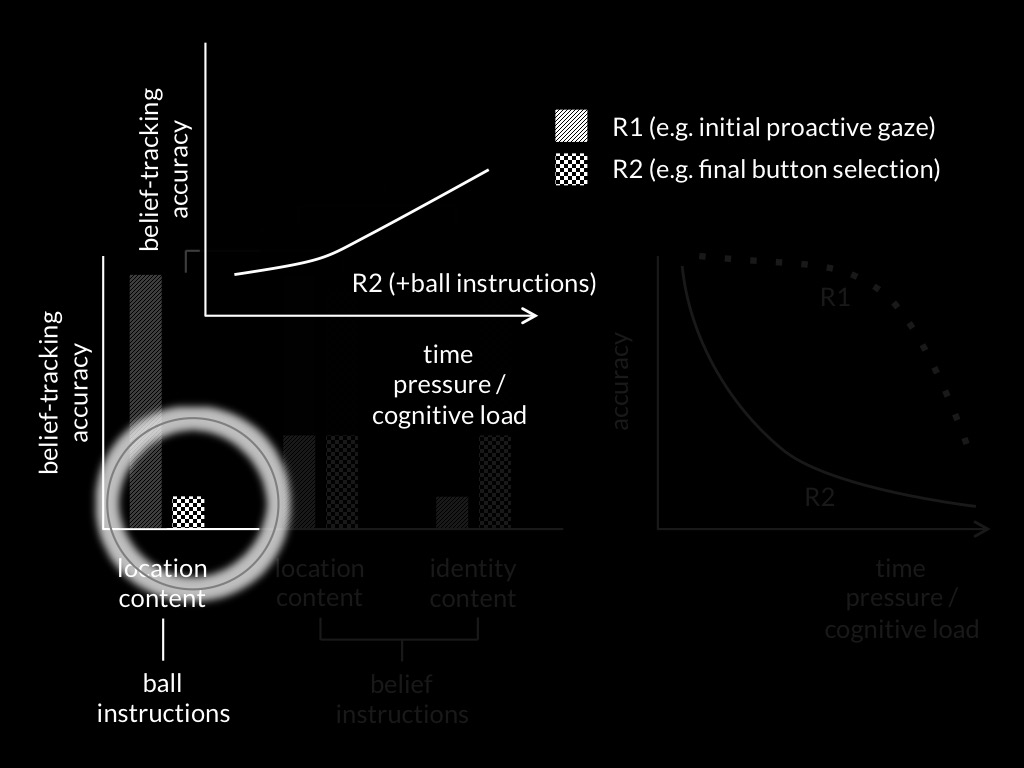 It is possible that increasing time pressure will very slightly, but perhaps measurably increase the probability that button presses are dominated by a different mindreading process, one that is less sensitive to instructions. In that case, we would expect to observe slightly more belief tracking in the responses as time pressure is increased.
\citet{todd:2016_dissociating} have recently demonstrated this type of effect for L1-VPT; as far as I know, it has not yet been demonstrated for belief tracking.

So what does a Dual Process Theory of Mindreading claim? The core claim is just this:

Two (or more) mindreading processes are distinct:
the conditions which influence whether they occur,
and which outputs they generate,
do not completely overlap.